The Battle for Aridia, Part 8

Previously, on MinerBumping... In a series of brilliant military and diplomatic maneuvers, Agent Alt 00 crippled the mining operations of United Systems of Aridia and its feeder corp, U.S.A. - University. Aware that they were no longer safe within the sanctuary of their highsec island, the miners reacted badly in local. One even threatened to quit EVE forever. 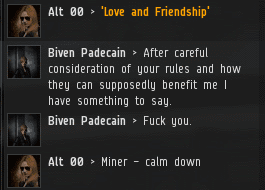 Biven Padecain was offered the chance to purchase a mining permit, but she decided she'd rather leave the game. 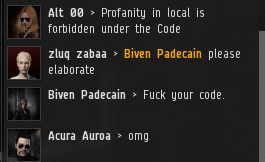 Despite being a member of a rebel corp, Acura Auroa was disgusted by Biven's temper tantrum. 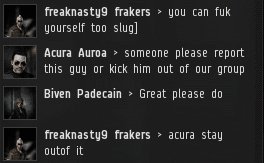 Acura wondered aloud whether Biven could be removed from the corp. But Acura's CEO, freaknasty9 frakers, told Acura to be quiet in local--rather than giving that command to Biven. It seemed as though freaknasty9 identified more with the crybaby miner. 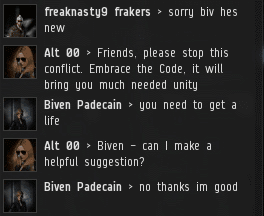 The New Order Agent, as usual, was the adult in the room. 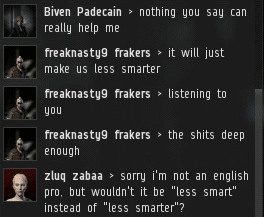 Biven completely rejected any suggestion of embracing the Code. Considering that she was Retriever-less, throwing a hissy fit, and threatening to quit the game, you'd think it was about time to try something different, right? 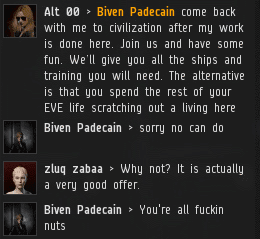 Alt 00 even offered to give Biven training and a bunch of free stuff, all compliments of the New Order. Still she refused. 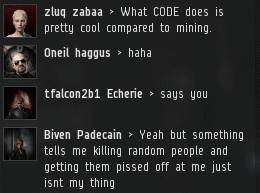 Biven must have been so beaten down by her experiences as a highsec miner that she didn't think herself capable of becoming an elite PvP'er. 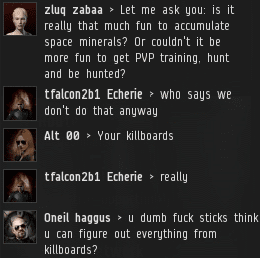 The sad truth is that highsec miners are slaves to routine. They can only handle doing the same boring, mindless thing over and over again. Bot-aspirants recoil at the thought of the excitement and adventure that our Agents experience every day. 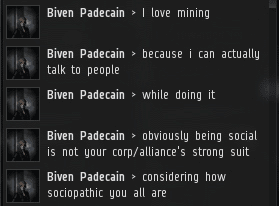 Biven wanted to socialize with people, so she chose AFK mining alone in highsec as her career. Sigh. 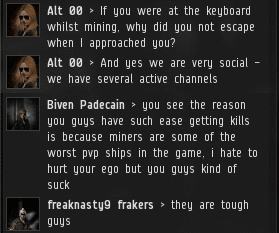 When a miner isn't rescued by the New Order, it's always for the same reason: The miner doesn't want to be saved. 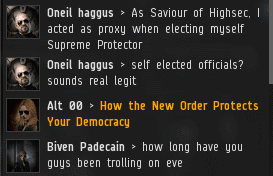 It was clear that Biven wasn't enjoying her EVE experience with the Aridian rebels. So her fellow carebears tried to undermine the Code's legitimacy, leaving her with no alternative but to continue in her misery. What a cynical way to treat one's corpmates! 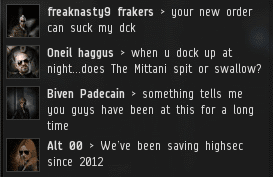 The rebels continued to protest in local. What they didn't realize is that when carebears speak out against the Code, they only help us gain more recruits. 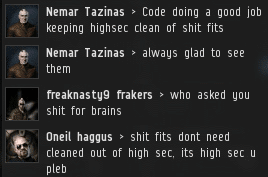 Every moment Alt 00 remained in Aridia, she won more hearts and minds to the Code. The tide was turning.

To be continued...
Posted by MinerBumping at 01:04