One of Bug 5150's alts lost a 399 million isk pod to Agent Marina Gankalot. How would he respond?

...By inaugurating the latest edition of the Highsec Miner Grab Bag. Welcome!

Metaphorically speaking, the Code is one big prompt. Still, I can see JF Tanaka's point. CCP should add the Code to the tutorial, or maybe have it broadcasted whenever a player enters highsec--similar to those criminal notifications you see.

Even the rebels expect me to walk on water. 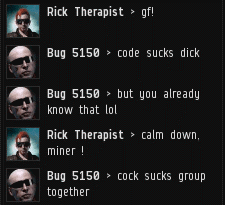 Bug was back at it again. Rick Therapist isn't called a therapist for nothing. With over 4,000 kills to his name, you can just imagine how many miners he's had to counsel. 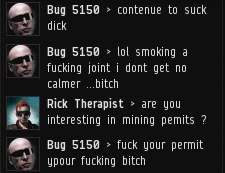 Bug said he couldn't get any calmer. This raises a disturbing question: What if all the miners we deal with are already on their best behavior? 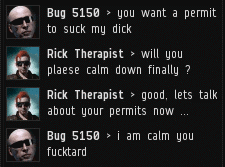 Regardless, we expect better from the miners. If they're having trouble calming down, they can at least start with a 10 million isk payment.

CEO sammy far received a wardec warning. This time, however, the notification didn't involve a request to expel a corp member... 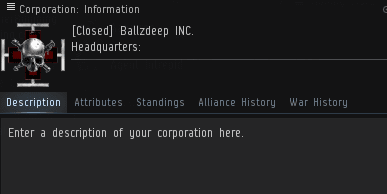 ...The entire corp was ordered to disband due to its inappropriate name. There are children in highsec, you know.

A funny thing about carebears: They all demand the benefits of taxation, but none of them want to pay.

Agent Super Perforator was helping some people learn how to mine properly in highsec. The ISD members in local had other ideas. 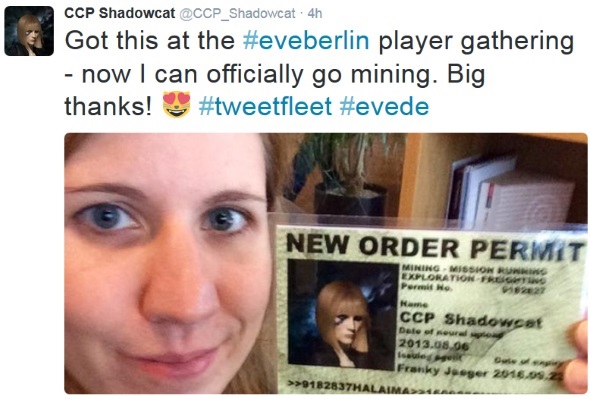 Your ISDs, ladies and gentlemen. Ruining the official EVE forums and encouraging new players to think that mining is the most fun EVE has to offer.

Rayne Hamataro was idling in a frigate when he was popped at the gate by Agent Aaaarrgg. Rayne then got an idea. What if he could hunt down the man who ganked him?

Though Rayne was unable to catch Aaaarrgg and exact his revenge, a new world had opened to him: The world of EVE as it is meant to be played. Judging by Rayne's experience, it's more fun than mining.
Posted by MinerBumping at 17:43