Nothing and no one intimidates the Agents of the New Order. No matter how formidable their opponents may appear on the surface, they're no match for the Code. 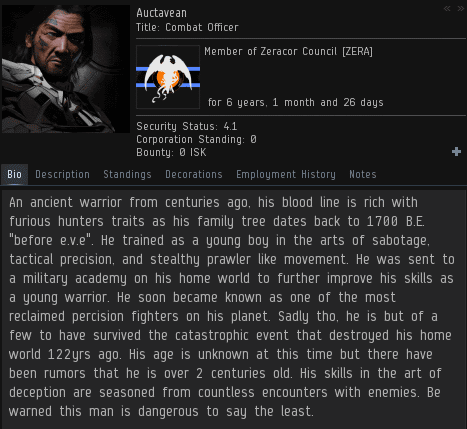 Auctavean, a 7½ year veteran of EVE, engaged in a fierce round of PvP with Agent Aaaarrgg. Auctavean's bio offered a warning of how dangerous he was, but Aaaarrgg didn't give it a second thought--he jumped right into combat. The two warriors did battle. 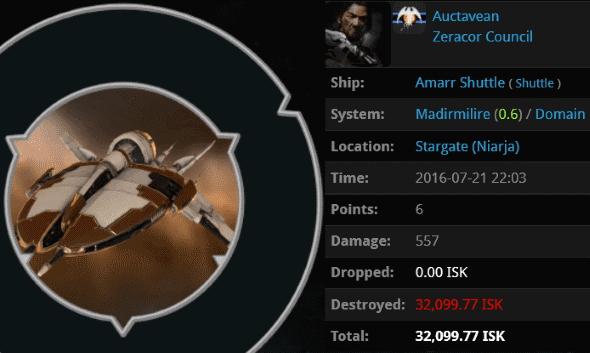 Over the course of the last few years, the New Order has managed to cut the population of autopiloting shuttles by 95%. That sort of thing doesn't happen overnight. It requires the steady culling of carebears over a long period. And it necessitates not only the destruction of PLEX-carrying shuttles and shuttles containing pods with billions worth of implants, but also empty shuttles like Auctavean's.

Our Agents are more than happy to gank empty shuttles if it means bringing my vision of highsec that much closer to reality.

Why people like Auctavean can't understand and appreciate that vision, who knows? Perhaps they're too self-absorbed to see things from someone else's point of view.

Though Auctavean claimed not to care about the loss of his shuttle, it was still a touchy subject for him. He spoke in a careless and insensitive manner.

Auctavean confessed that he had been autopiloting, but he denied that he was AFK. Another mystery: Why sit at your keyboard and watch your shuttle warp to each gate at 15km, when you can warp directly to the gate? Aaaarrgg could only assume that Auctavean aspired to become a bot.

The carebear insisted that CCP created shuttles for the sole purpose of autopiloting--an absurd theory with no evidence to support it. CCP may allow autopiloting in highsec, but I do not.

Auctavean, disgusted, prepared to end the conversation by leaving the system. Neutral parties in local concluded that our Agent had won the day.

Scandal! Just as Auctavean was about to leave, Aaaarrgg uncovered the carebear's personal killboard stats. Despite a bio boasting of "countless encounters with enemies" and touting himself as "one of the most reclaimed [sic] percision [sic] fighters on his planet," Auctavean only managed to kill 10 ships during seven and a half years of EVE.

Auctavean's wounded pride wouldn't allow him to leave the system without responding to the charge. Aaaarrgg judged it to be a good time to offer Auctavean a mining permit. Again the carebear refused him.

Auctavean exploded. He admitted that he had already known about the Code's permit requirement. He even confessed to reading enemy propaganda.

Aaaarrgg urged common sense, but Auctavean wasn't having it. He left the system in a hurry--partly out of anger, but partly, I think, out of shame. When people are ashamed of doing bad things, that's progress. Agent Aaaarrgg could count it a productive evening.
Posted by MinerBumping at 18:40