Nullsec alliances are obsessed with "supers". They spend more time thinking about supers than actually using them in combat. Indeed, they rarely make an appearance in combat unless dog-piling a ship that can't shoot back. 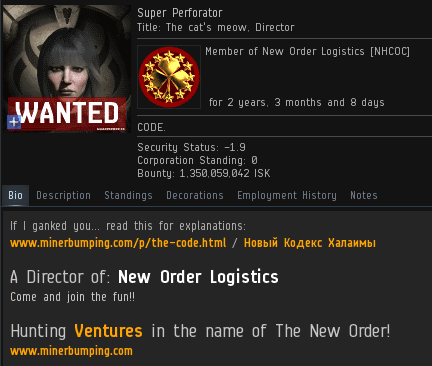 Super Perforator is a different kind of super. She is an Agent of the New Order and a devastatingly effective ganker. One of her most finely honed crafts: the art of ganking Ventures. It's a noble practice and a classic example of elite PvP. Thus, Super Perforator is far more relevant than a fleet of nullsec supers. 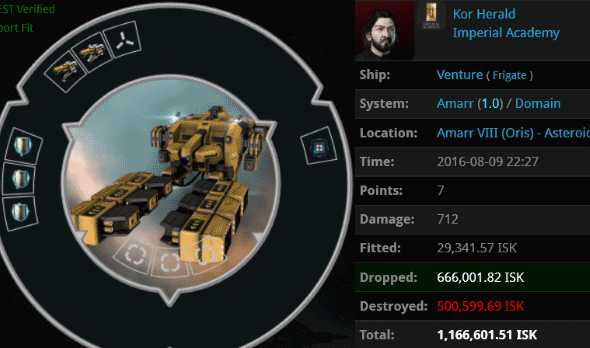 Super scored a huge victory against Kor Herald's triple Civilian Shield Booster Venture. Impressively, the battle took place in the Amarr system. The busy trade hub was filled with spectators, any one of whom could've tried to intervene. None did.

In such a bustling environment, Super had an excellent opportunity to collect Miner Bingo quotes, along with the minor miner clichés that don't have a place of honour on the official Bingo card. How many can you spot?


Kor Herald > just some random douchebag preying on mining ships
Super Perforator > flying 20km towards the target..... he not being careful
Goat The-Admiral > as soon has those venture gankers go on grid just bounce
Mei-Xing Karn > Why not buy a permit? They're very affordable.
Matrosov Glengoski Razyashchiy > because CODE does not control ganking in eve

The Venture pilot claimed he'd been careful, but Super had slow-boated his way over to the Venture long before opening fire. Miners are a lot more likely to tell lies than to use a D-scanner.


Matrosov Glengoski Razyashchiy > it would make sense if they were the owners or dictated who ganked
Goat The-Admiral > they think they do
Vorew Vokimdra > Paying CODE is like paying for herpes...
Super Perforator > Permits are better value for money

Amarr public opinion was split. Some felt that mining permits were well worth the 10 million isk fee. Others were wrong.

Unsurprisingly, highsec miners are an overcautious breed. They always worry, "What if I pay and they gank me anyway?" They should be asking themselves, "What if they don't gank me?"

The name of James 315 is itself an instrument which may be employed for all sorts of purposes. Drop it in local and watch what happens.


Dereck Inurick > Let's just tell it like it is, guys: CODE sells permits and then immediately kills them. They're a farce at best and banably offensive at the worst.
Kor Herald > James some kind of chief of these privateers?
Kor Herald > go venture out into my main accounts regions and try it lol
Super Perforator > Kor Herald you a big boy outside of high sec?

The "helpless newbie" in a Venture suddenly transformed, bragging about a powerful nullsec alt. Another resident of Amarr suggested that the CODE. alliance ought to be permabanned from EVE. The moment my name was mentioned, everyone's emotions were heightened.

Despite of the passage of time, Kor's anger intensified. He was so angry that he forgot he wasn't a "new player". (Of note, for many miners Donald Trump is quickly taking Hitler's place.)

Kor questioned the relevance of the New Order and its Agents. Yet they were all he could think about. Calling us unimportant had become the most important thing to him.


Dereck Inurick > Frankly if your idea of getting not-bored is "be a pain in the ass for someone" you aren't worth the genetic material spent to make you.
Kor Herald > Eve is dying. and these dickless wonders are certainly not helping by forcing new players out of this area
Kor Herald > these guys are a waste of server resources, bandwidth and frankly our oxygen

Mere seconds after saying our Agents were "not relevant or important in any way," Kor accused them of killing EVE Online.

Kor couldn't help but be skeptical about CCP's claims that ganking improves new player retention. CCP itself was skeptical, too, hence all of the studies they paid for. They could've saved themselves some much-needed money if they'd simply taken my word for it.


Kor Herald > clearly not, as theres few new registtrations these days
Daniel Leverquin > I killed a few CODE.
Daniel Leverquin > easy peasy
Xiang Tsung > code can kiss my expletive I mine where I want when I want they have a problem with it they can take a long look down the end of my main's battleships guns

One possible explanation for the decline in nullsec PvP satisfaction: All of the most fearsome nullsec combat pilots are busy mining on their highsec alts and threatening our Agents.


Dereck Inurick > Just set 'em to ignore and let them have thier fun. Eventually CCP will put the foot down, as a business, by either pulling the plug or initiating a banwave larger than the last one in Overwatch.
Dereck Inurick > Regardless of which the tears will be glorious
Matrosov Glengoski Razyashchiy > idk if ccp will do that

The people of Amarr indulged in speculation about whether CCP might ban all the gankers in order to save EVE. But as CCP's studies demonstrated, that's not how you save EVE. You save EVE by saving highsec. And I would think that by now, we've all learned the one and only way that can be accomplished.
Posted by MinerBumping at 17:49