A Funeral for CODE., Part 2

Previously, on MinerBumping... New Order spies infiltrated the toxic Anti-Ganking channel. Among other surprising revelations contained in the leaked logs: Anti-Gankers declared the end of CODE.!

Grant Halliday lamented the departure of the CODE. alliance. Though he'd always opposed the practice of freighter ganking, he was almost sad to see it go.

Waxing nostalgic, some Anti-Gankers shared stories about CODE.'s big win at the Alliance Tournament in 2014. As usual, they were uncertain about the details, despite having access to the excellent resource that is MinerBumping.

Days later, Abudban carebear Svipull wandered into the Anti-Ganking channel. He was concerned that anti-Code forces lacked the organization needed to combat ganking. Other Anti-Gankers readily agreed: They were having great difficulty stopping any ganks.

Other Anti-Gankers complained bitterly about the game mechanics involved. Despite years of endless nerfs to ganking, the anti-Code crowd genuinely believes the deck is stacked against them. It might even take more than One More Nerf™ to restore balance!

No one involved in the conversation suggested that CODE. had already been defeated or had even diminished in power. Quite the opposite: They took for granted that the New Order dominates highsec and is driving people away from EVE in droves. 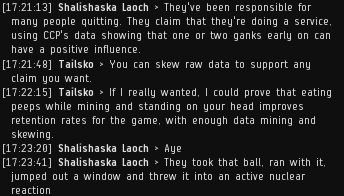 Then they accused the New Order of cherry-picking CCP's data and spinning the results. Like so much else that Anti-Gankers believe, this, too, is demonstrably false. We didn't take data points and come up with a conclusion; we merely reported CCP's own conclusion from their own research. According to CCP Rise, CCP expected the opposite of what their research showed. Their studies pushed CCP in the opposite direction of their biases--repeatedly.


"We have tried and tried to validate the myth that griefing has a pronounced affect on new players. We have failed."
-- CCP Rise

It's true that people can spin. But CCP was predisposed to spin in the other direction. The evidence was so overwhelming that they were forced to admit that we, not the carebears, were right. And we in the New Order merely reported CCP's announcement; no spin or data interpretation needed on our part.

The carebears returned to the subject of Anti-Ganker organization. If you've ever wondered why, in four years, the anti-Code forces have failed to organize, look no further: It took less than a minute for one of their own to pour cold water all over the idea. Tailsko didn't enjoy hunting gankers as much as he enjoyed AFK mining.

Svipull had a vision of an entire highsec highway policed by Anti-Gankers. Imagine the possibilities!

...But Styx Saken joined in dampening Svipull's enthusiasm. He claimed that the Anti-Gankers already had plenty of security patrolling those areas. There was no danger of being ganked in Uedama. Not with the Anti-Gankers on the case.

Svipull's fanaticism was not enough to make him want to go to Gallente or Minmatar highsec, though.

More great intel from the Anti-Ganking crew: The New Order is preparing to invade southern nullsec.

The Anti-Ganking brain trust concluded their meeting on a pessimistic note. The triumphalism of previous days was nowhere in evidence. This is only to be expected. The anti-Code rebels have long been whipsawed by two contradictory ideas: That the New Order is irrelevant and powerless, and that it's so powerful and influential that it's ruining EVE. The truth, of course, is that the New Order is powerful and influential--and that it uses its power and influence to save highsec and honour the principles upon which EVE Online was founded. And it always will. Always.
Posted by MinerBumping at 17:29