The Battle for Aridia, Part 9

Previously, on MinerBumping... Unable to stop Agent Alt 00 from enforcing the Code, the United Systems of Aridia alliance and its feeder corp, U.S.A. - University, saw no alternative but to cry endlessly in local. They thought they could discourage our Agent, but instead, they only helped the New Order gain more supporters. 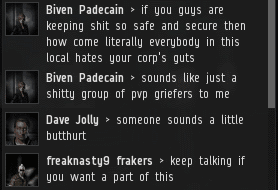 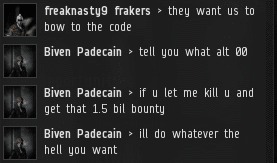 Earlier, Biven had declared her intention to quit the game. Now, perhaps, she had been inspired to take part in PvP at last.

Unfortunately, the miner still wanted to take the easy way out. She wanted to be handed a PvP victory the way she'd been handed highsec asteroids. 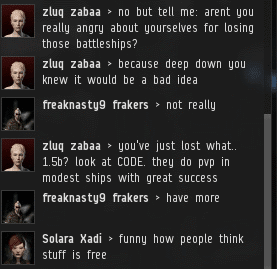 Code supporter zluq zabaa finally got a chance to interview the Aridian rebels about their recent catastrophic loss in lowsec. freaknasty9 offered only a feeble "our losses have already been replaced." 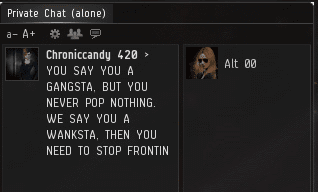 Despite the growing support for the New Order in local, Alt 00 knew that there were hidden threats all across Aridia. A random convo confirmed it--there was still much work to be done. 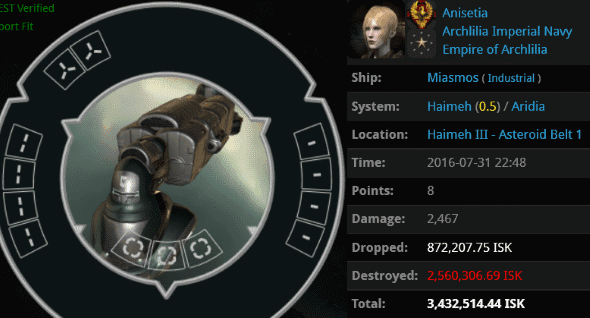 With the lowsec passage secured by friendly forces, Alt 00 made more supply runs. Back in Aridia, she noticed a group of tanked Procurers flying under the banner of the Empire of Archlilia alliance. The miners were tanked, but their hauler was not.

There was no doubt about it: Public opinion strongly favored the Code. No wonder everyone voted* to ratify the Code.

Several minutes later, Mira Hyacinth spoke up in local. She was responsible for the Empire of Achlilia mining alts, along with the hauler that had been ganked. 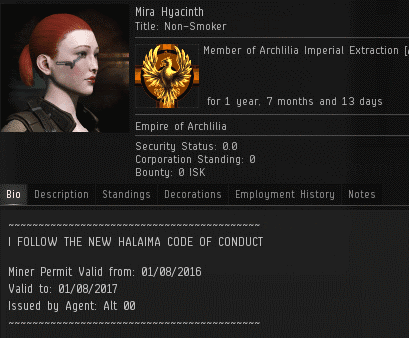 Many highsec miners live their lives wrapped up in a cocoon of delusions. Not Mira. She knew all too well that she needed a mining permit. 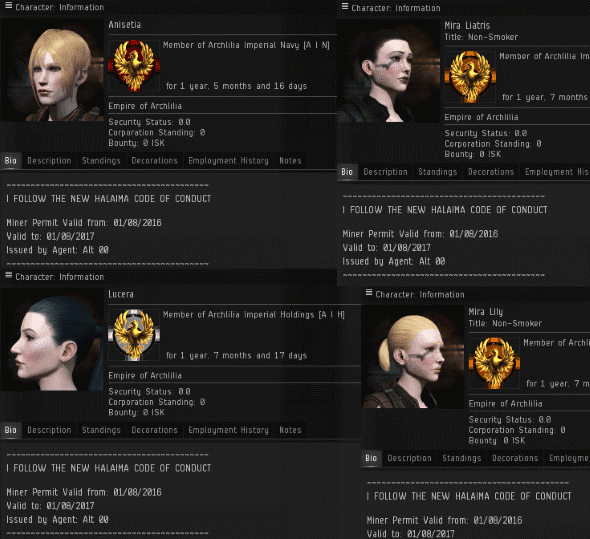 Mira was impressed by the top-notch customer service provided by the New Order. Buying five fresh mining permits only whetted her appetite for Code-compliance.

The New Order steadily added to its ranks. Aridia was Code country.

To be continued...
Posted by MinerBumping at 15:31