The Battle for Aridia, Part 3

Previously, on MinerBumping... Agent Alt 00 began patrolling the highsec islands of the Aridia region. As a newcomer to the area, she took stock of the situation with fresh eyes. Our heroine noticed non-compliant miners, especially among the U.S.A. - University corporation. But she also encountered some who strongly supported the Code. 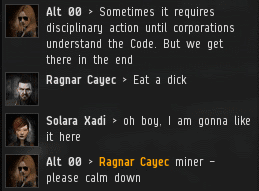 Alt 00 was having a pleasant chat with pro-Code locals when she was rudely interrupted by Ragnar Cayec. 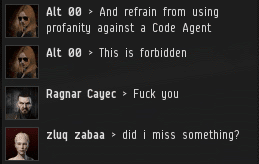 Ragnar also belonged to U.S.A. - University. Evidently he'd developed a prejudice against our Agent as a result of her "excessive policing" of the corp's miners. 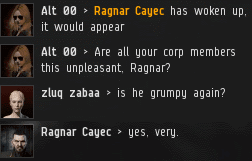 Ragnar's first loyalty was to himself and his corporation, rather than the Code. No wonder he was all bent out of shape. 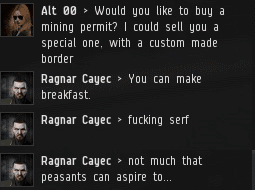 Alt 00's conversation with Ragnar left her convinced that there was much more work to be done in Aridia. She'd need to leave the highsec island and return to her stockpile to get more supplies. 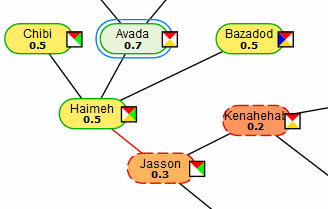 One of the reasons the risk/reward system is broken in EVE is that logistics are much simpler and more convenient in highsec. However, reaching highsec islands requires cutting across several lowsec systems. Alt 00 often found them camped. 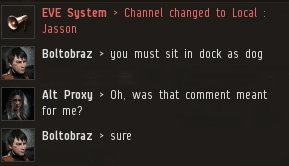 Our Agent did her best to organize her supply chain and find multiple sources for Catalysts and modules. Even so, she had no choice but to dodge lowsec pirates. 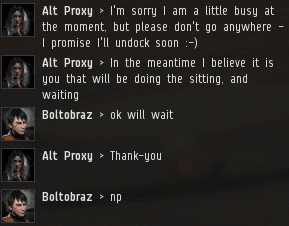 The New Order's mission is to civilize highsec. But make no mistake--our Agents are the most elite PvP'ers in the entire game. Alt 00 and her alts outmaneuvered the lowsec pirates, slipped through the gatecamps, and continued bringing justice to Aridia's highsec islands. 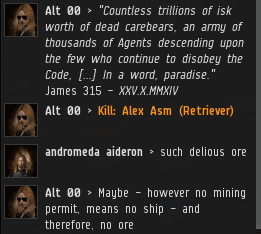 Triumphant once again, Alt 00 destroyed an untanked Retriever, this one belonging to a member of the United Systems of Aridia alliance. 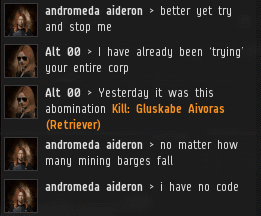 Another heckler popped up in local. andromeda aideron also belonged to U.S.A. - University. Was it a feeder corp for the United Systems of Aridia? 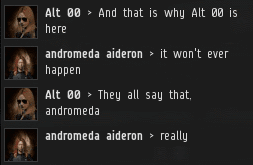 andromeda was defiant. She was adamant about not believing in anything. Nihilism and bot-aspirancy had made the leap across the lowsec moats. 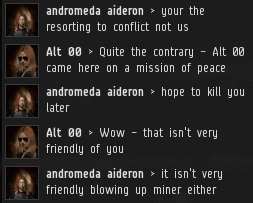 Alt 00 was getting quite a reputation. Everyone in the "University" corp had been told to watch out for her. 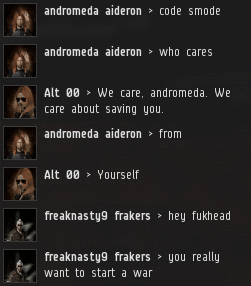 Things were heating up in Aridia.

To be continued...
Posted by MinerBumping at 16:05