A Most Honourable Duel

Yesterday I announced the beginning of the New Order's campaign to liberate the northern cluster of Gallente ice fields. This campaign gives us the chance to reunite with our friends in the Tolle area. Aydoteaux, the system next door, was a fertile ground for selling mining permits last time we were here.

Those who already signed up with the New Order greeted us warmly. Those who have yet to hop on board weren't as enthusiastic. Lord Xymox became enraged with Agent Tubrug1. He challenged Tubrug1 to a duel, with the fate of the system to be decided by its outcome.

Xymox was impatient. Yes, POS can stand for multiple things in this game. Many a logistics director has accidentally insulted the unaware.

Agents, on the other hand, are very patient. Tubrug1 gently encouraged Xymox to join the New Order.

It soon became clear that Xymox thought of himself as a hero. He intended to protect the miners of Aydoteaux from the New Order. That's like protecting someone from water when they're dying of thirst. 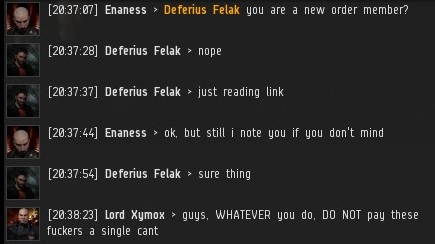 As the rebel miners investigated everyone in local to determine the identity of our Agents, Xymox offered to destroy any Agent who interferred with mining operations in the system.

Xymox again offered single combat to Turbrug1. Xymox was flying a tech III cruiser, while Tubrug1 would bring his trusty battle Badger. Since taking from a can makes you attackable by everyone, rather than just the corp you stole from, Xymox and Tubrug1 would join a fleet together. That way, Concord would not interfere. 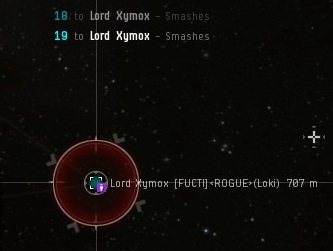 Xymox's Loki began hammering away at the Badger's shields. On the one hand, Xymox had a tech III ship with an impressive array of weapons--against Tubrug1's tech I hauler. On the other hand, Tubrug1 is an Agent of the New Order, and Invincible. Oh yeah, and being in the same fleet as someone doesn't mean Concord won't interfere if you shoot them. 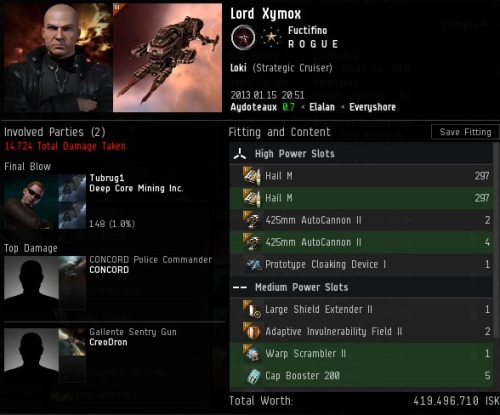 In other words, Lord Xymox inadvertently attempted a suicide gank. Concord arrived, sending more than 400 million isk down the drain. 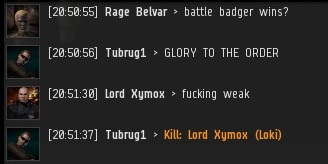 The Badger held its ground, and the New Order emerged victorious once more.

CCP made can thieves attackable by everyone in order to discourage can-flipping, and to make highsec safer. In doing so, they removed the one mechanic available to arrange impromptu duels in highsec. The resulting confusion spelled disaster for Xymox, who was desperate for a duel and assumed there was another way.

Xymox finally realized that CCP had, in fact, removed dueling from highsec. He went back to the Miner Bingo card and asked Tubrug1 to "meet me in lowsec". But there's no time for that--not while highsec needs saving!
Posted by MinerBumping at 19:18