The Rebels Strike Back, Part 1 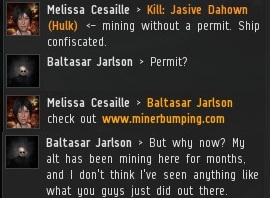 Over the past month, the newly-knighted Knights of the Order have wrought havoc upon the botters and bot-aspirants of highsec, who were taken completely unprepared. 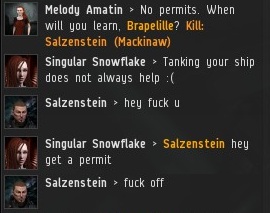 Salzenstein and many others like him were forcibly woken from their slumber. That kind of thing can make a man grouchy. 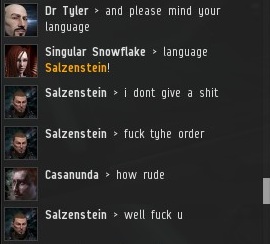 Miners claimed they had no idea that there was a set of rules they had to follow in order to mine in my highsec. Now they're on notice.

Salzenstein hasn't been reading enough MinerBumping lately. It's so important to keep up. He was expecting bumps, but he got killed instead. The Agents of the New Order are duly authorized to use anything in their toolkit to help fix highsec. 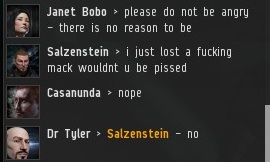 But there are some people who don't approve of the New Order and the change we bring. They want the status quo and more botterdom. And they decided it was time to strike back. 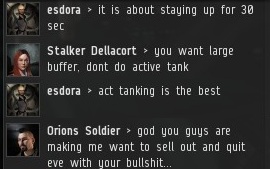 Even though it's far cheaper to pay the 10 million isk per year and go for maximum yield, some obstinate miners decided to try tanking our attacks instead. They debated vigorously over whether it was better to go for an active tank or a buffer tank.

It's inconclusive. Some miners buffer tank, while others put Civilian Shield Boosters on their 200 million isk Mackinaws. Still others prefer to use no tank at all. In educated circles, it is known that the permit tank is the best tank.

Baani, who has since suffered at the hands of the New Order, recommended the use of remote rep drones. As far as I know, no one has tried that one yet, but I'm looking forward to it.

Rokmal Serala, who claims to be "Red Penned and proud", followed us from Tolle. He offered remote reps to all the miners of Brapelille, to save them from our ganks. It didn't go as planned, and he was unable to rescue a single miner. Only the New Order rescues miners. I told him to stop, but Rokmal insisted on giving aid to the resistance. 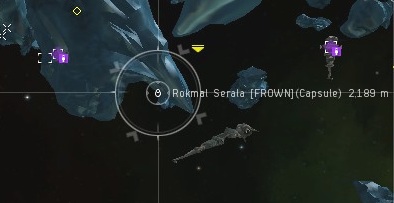 Krom Thomson was another miner who rested all his hopes on the shoulders of his drones. A fleet of Catalysts, however, is more powerful than a handful of drones. Especially when that fleet is filled with pilots who fight for something they believe in. Drones, on the other hand, believe in nothing. They are bots.

Guardian Turtle's space lawyer spidey-sense told him that ganking is probably a EULA violation. In fact he was confident enough to matter-of-factly inform everyone in local of his interpretation of the rules. 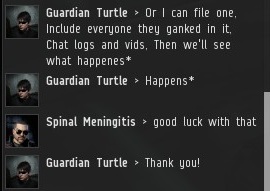 A lot of people think that the space lawyers only objected to bumping because it was a creative, unorthodox way to exercise our power. Not so! They objected to it because it was inconvenient. Anything, including shooting at spaceships, can be against the EULA in their minds.

The rebel miners found that tanking, using drones, and remote-repping were unable to stop the New Order and its steady march of progress. Would petitioning CCP be the answer? Could the rebels find some way to put an end to the Great Awakening of Highsec?

To be continued...
Posted by MinerBumping at 02:36