Previously, on MinerBumping... The New Order was scandalized to hear about the mistreatment of a Code-compliant miner by Jake Salvator, CEO of Torarjan Collective. In response, I vowed to get justice for the miner, declaring open season on Jake and his corp.

Though Jake had eschewed diplomacy in the past, our efforts against his corp opened his mind.

I am a man of peace, diplomacy, and reason. It is my wish that no man or woman in highsec be long deprived of the benefits of New Order membership. I contacted Jake as soon as I got his message. 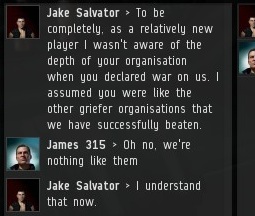 Attacks against the Torarjan Collective had disrupted their mining operations and derailed their plan for mass-recruitment. The power of the New Order was not to be trifled with. 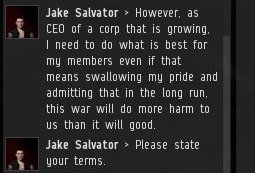 Jake got right to the point. He wanted peace with the New Order. I responded by reiterating the same terms that I had listed in the blog post announcing the crusade against Torarjan. 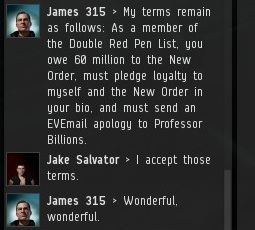 Jake immediately went to work drafting an apology to Professor Billions, the miner he had expelled for following the Code. 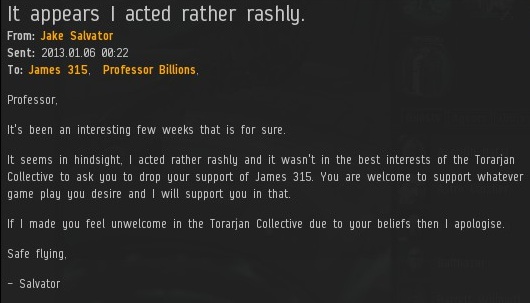 Jake then proceeded to comply with the next provision of our agreement:

After transferring the isk, he updated his bio: 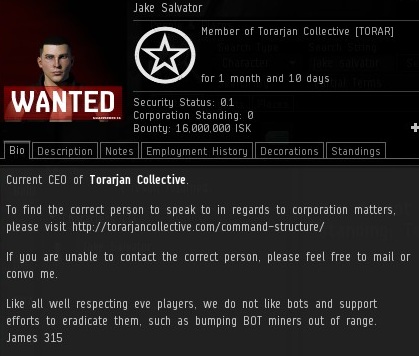 Though not in standard "bumper sticker" nomenclature, it would suffice. Everyone knows what the name of James 315 means. 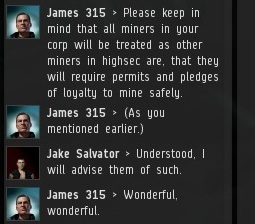 Though Jake had paid his own fee, the miners of Torarjan would still need to get right with the Code. 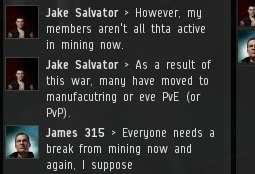 Jake agreed to instruct his miners on how to avoid bump and/or gank, though he mentioned that many in his corp had been inspired to change professions. The New Order broadened their horizons, a service it has provided to many highsec miners.

Having made amends, the only member of the Double Red Pen List was cleared.

Professor Billions was delighted to read Jake's EVEmail. The New Order is always on the side of peace and friendship. We offer reconciliation to everyone in highsec, just as we brought it to Jake Salvator and Professor Billions. When all the people of highsec join the New Order, there will be unity where once there was division. 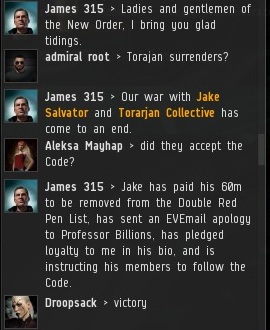 The conflict with Torarjan Collective began because we needed to send the message that the Code is not something that puts a target on a miner's back. It is not an invitation to reproach or recriminations from our adversaries. The Code is the law in highsec. It applies to all the miners. They should not be ashamed to follow the Code; they should be afraid not to follow it.

One Order, One Code, One Saviour of Highsec. Compliance must be universal.
Posted by MinerBumping at 03:19