The New Order Saves Another Miner 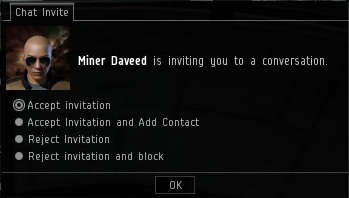 Convo requests from people with "Miner" in their name are like a box of chocolates. You never know what you're gonna get. Was this gentleman going to notify me about 10 million isk inbound for my wallet? Or would he have some baseless complaint about the way I do business? 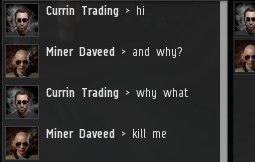 Ah. Miner Daveed was curious about the reason for his death. I kill a lot of people, but I remembered this guy's name from earlier in the day. Seems he finally returned to his keyboard. 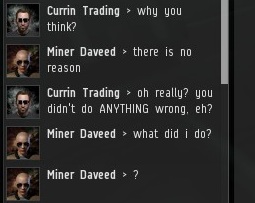 Daveed pleaded ignorance. Protip for miners: If you want to get on my good side, don't pretend you weren't violating the Code. Instead, confess and apologize. I like people who are truthful with me, and if you're a highsec miner, that means starting the conversation by admitting your shortcomings. 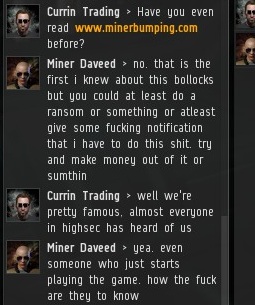 Despite the fact that MinerBumping is among the top two or three EVE blogs in terms of daily traffic, Daveed claimed he had never heard of the New Order before. Then the situation got sticky: He also suggested he was a brand new player, and that he simply never had the opportunity to hear about us. 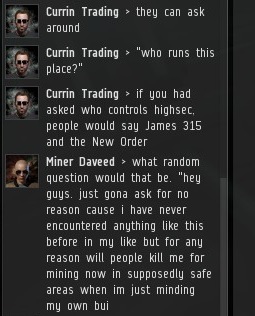 Was this the realization of everyone's greatest fear? Was Miner Daveed the mythical "innocent noobie gank victim" come to life? 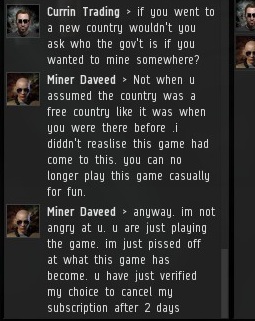 Daveed was heartbroken. He had only been playing EVE for two days, and now he was going to have to quit because of mistreatment by the New Order. At long last, all those anti-PvP carebears who say we need to make highsec safer for the noobies had their poster child. 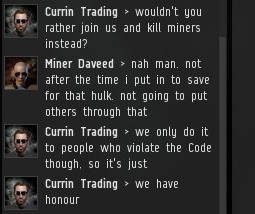 I invited Daveed to put aside his career and join the New Order. But he said something suspicious. He was flying a Hulk? And he put in time to save up for it? How does a noobie save up for a Hulk in two days, let alone fly it?

I invited some of my gank fleet members to join the private convo and help me convince Daveed to stay. Maybe if he experienced the New Order family firsthand, he would see there's more to EVE than solo mining. 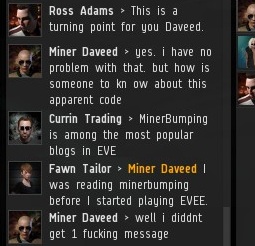 It was an uphill battle. Daveed repeated his supposed ignorance of the Code, despite the fact that everyone who mines in my space (0.5+ security) is deemed to be fully aware of its contents, and to have agreed to it. Just like if you go to a country, you must follow their laws. 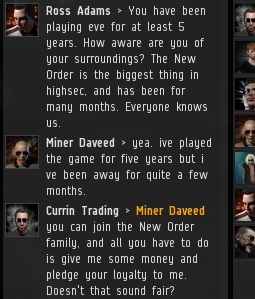 The other shoe dropped, as it always does. Miner Daveed was, in fact, a 2007 character. He has been playing for more than five years, though he's taken long breaks during that period. Funny, but it happens this way every time. The "innocent noobies" who get ganked are never actually new to the game. 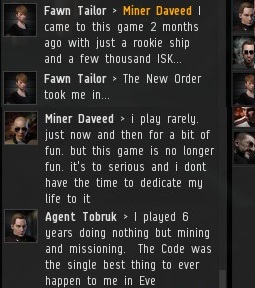 The fleet shared their stories and encouraged Daveed to have some fun in the game. But doing anything other than AFK mining by himself in a Hulk was "too serious". Only AFK mining is fun. 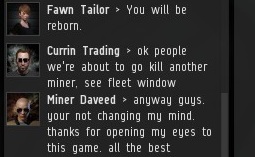 Daveed was struck by how much highsec had changed since he last mined. I often promise that if the people of highsec just give the New Order a few years, they won't even recognize highsec anymore.

Daveed departed. Yet it was a victory to the New Order, for we saved him--from his ignorance. He now knows more about EVE and the new regime controlling highsec than he did before. And a day in which you learn something important is a day that didn't go to waste. AFK mining by yourself for five years is wasteful. You'll get far more out of a five-minute encounter with the New Order family.
Posted by MinerBumping at 19:41