Come one, come all, for the latest edition of the Grab Bag of miscellaneous highsec miner tears. Off we go! 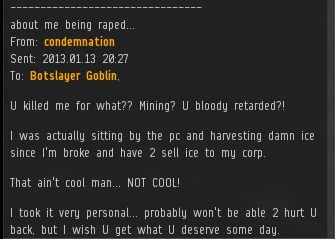 Unlicensed miner condemnation lived up to his name when he scolded Agent Botslayer Goblin in an angry EVEmail. Two things of note. First, the casual subject heading ("re: my rape"). And second, condemnation may be the first miner who actually admitted he'll never get revenge on his attackers. Remarkable!

After watching "her" system succumb to the power of the New Order, Kamihara Jaynara began a sarcastic screed in local. 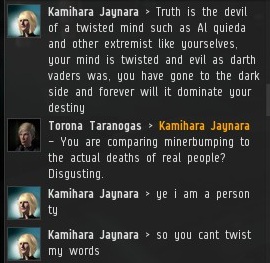 Once again, a miner surprises us with innovation. Kamihara came up with a novel excuse for comparing New Order attacks to the deaths of real people: Because EVE players are real people! Good point--though the "death" part of the comparison is still a work in progress.

Having spoken her piece, Kamihara retired from the scene, classy as ever. 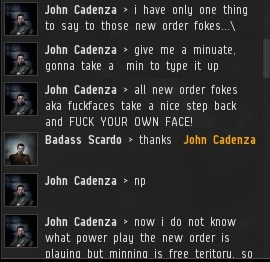 After taking the effort to type up one last shot at us, John Cadenza nevertheless stuck around to continue his rant. Personally, I think he peaked with "fuck your own face" in all-caps. Always leave your audience wanting more, John.

In the first of an unusual series of comparisons, miner Ragnar Tyrsson put the Hitler analogies to the side to reference Miss Sophie's butler. This is a really odd way of saying that everyone is my alt, I think. 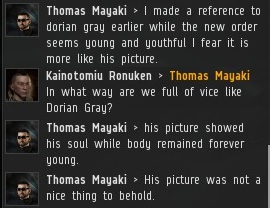 Next up, Thomas Mayaki was struck by the similarity of the New Order to classic novel "The Picture of Dorian Gray". 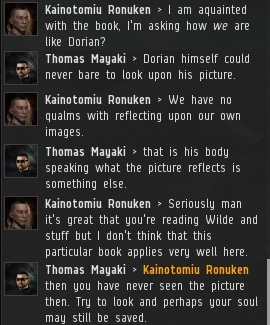 Upon further inspection, the comparison is as clear as mud. This isn't the first time we've been the subject of a bizarre literary comparison, and it probably won't be the last. 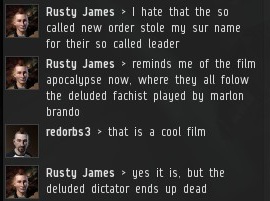 Rounding out the unusual comparisons, Rusty James with an "Apocalypse Now" reference. But it backfired: 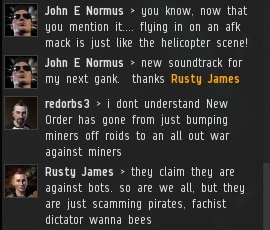 Agent John E Normus is inspired by the comparison. I don't often say this, but someone needs to bring his idea to life. 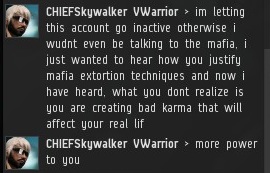 I'm a big believer in the power of karma. That's why I spend my time putting as much positive energy into the world as possible. 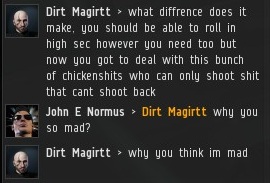 Dirt Magirtt has it all wrong. I'm the guy who wants to make it so miners can "roll in highsec" however they need to, and that's why the New Order does what it does. Our purpose is to preserve miners' freedoms. We protect their rights by forcing them to obey the Code. 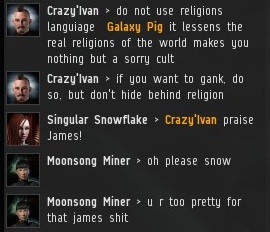 One of the most puzzling minds in the belts of highsec belongs to Moonsong Miner. She came up with a creative new method for persuading Agents to abandon our cause. 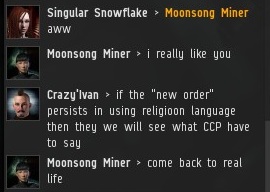 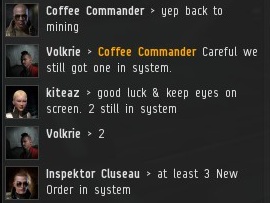 kiteaz's warning to her fellow miners makes me smile. Imagine a future where people feel the need to say "good luck" before they embark on a highsec mining op. That's a future worth building, wouldn't you agree?
Posted by MinerBumping at 02:29