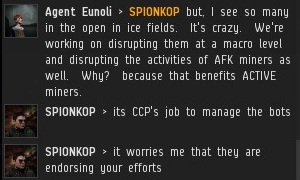 The perpetually beleaguered SPIONKOP was disappointed to hear that ganking miners is not against the EULA. But as it became clear that the rebels were not able to prevent miners from being ganked, they increasingly looked to CCP for salvation.

Renorion objected to the fact that people with negative sec status are able to fly ships in highsec, even if it's only for a few seconds. 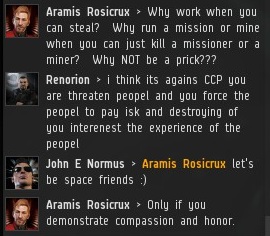 To Aramis Rosicrux, it didn't make sense that people should be allowed to gank. If people can shoot each other, why work honestly for isk? 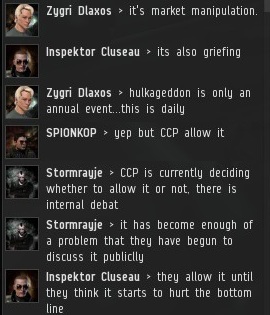 Rebel miners are starting to come to the conclusion that a complete takeover of highsec by the New Order is possible, perhaps even likely. The malcontents gathered in Chelien system to hold an impromptu conference on the matter. Would CCP step in? 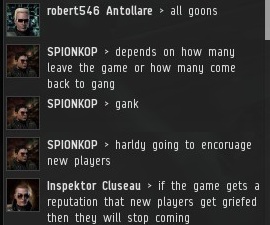 Foremost among their concerns: The fate of new players. Apparently "new players" are all flying around in 200 million isk exhumers. 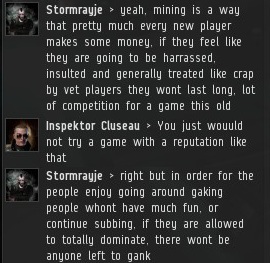 Resistance fighters expressed hope that CCP would feel financial pressure to shut down the New Order. But is there evidence of any new players leaving EVE because they lost 500 million worth of implants while AFK? Rusty James brought hope to his companions. He explained that shooting miners in highsec may, in fact, be against the EULA. All they could do was wait and see. 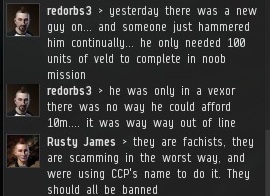 redorbs3 spun a sob story in local about a new player who was prevented from mining 100 units of veldspar. This unnamed new player only had a Vexor to mine with, and lacked 10 million isk for a permit. Of course, Vexors cost 10 million isk in Jita, and they're not mining ships, but whatever.

I like how as soon as redorbs3 makes an excuse for forgetting the miner's name, he immediately has to make another excuse for not getting good video of the incident. Why bring up the video at all? 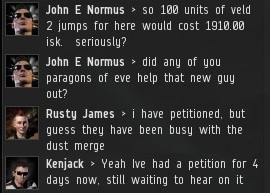 Local rebels shared their respective petition statuses. Who says the miners never do anything together?

After the Dust settles, Rusty hopes CCP will finally make a definitive announcement about whether it's against the EULA to shoot spaceships in a spaceship-shooting game. If, as Rusty expects, it's declared illegal, will the New Order have to pay back all those mining permits? Such are the dreams of the anti-Order movement. No wonder the New Order is always racking up victories.
Posted by MinerBumping at 20:18