Origin Story of a Rebel

People don't just wake up one day and decide to become rebels. For each resistance fighter there was an inciting incident, something that sparked off his or her doomed career as an anti-Order rebel. 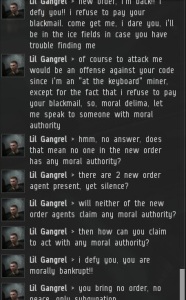 No, that's not an edited screenshot. It's Lil Gangrel, doing what he does best--shouting his feelings into an uncaring local. 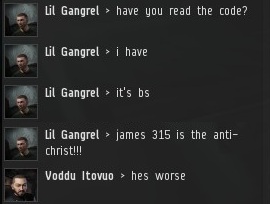 Lil claims to have read the Code. I doubt it. People who read the Code tend to agree with it and join our side. More likely, Lil is among those who "skimmed it". 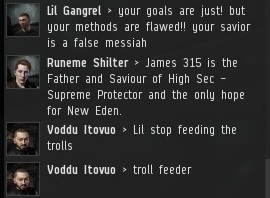 Lil's passion didn't endear him to his fellow rebels. Voddu Itovuo is as jaded as they come, and has his feet planted firmly in the "ignore them and they'll go away" camp. He prefers a silent local. 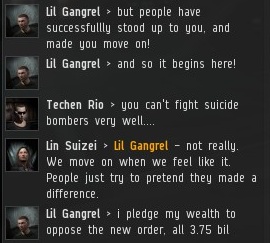 In an act of supreme defiance, Lil vowed to put a stop to the New Order. He would go to any length, and spare no expense, to end the New Order's tyranny. 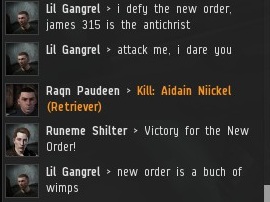 First, Lil demanded that everyone try to kill him. He may have been docked up at the time. Agents of the New Order ignored him and continued their vital work. Lil's plan had failed, but that was only Plan A. What would come next?

Lil offered to fund anti-Order activities out of his vast fortune. No one volunteered to take his money, however. 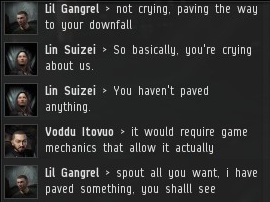 Voddu, a grizzled veteran who resisted the New Order for nearly a day, did not share Lil's youthful optimism. Convinced that the New Order's tactics cannot be countered, Voddu gave up hope of victory and resigned himself to his fate. The miners of highsec may as well hand over their exhumers now. 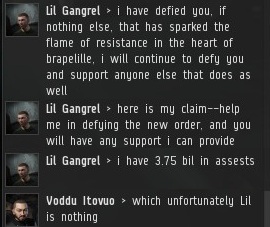 Lil again offered to spend his money in support of the cause he believed in. He wasn't sure how he would spend it--presumably he was open to suggestions. Voddu stomped on his dreams again. But why was Lil so insistent? What happened to him that radicalized him so? 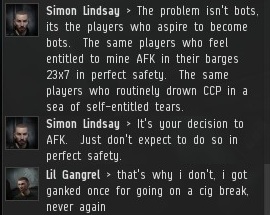 Lil finally revealed his tragic backstory. He made another vow: He would never mine AFK ever again. He may be a declared enemy of the New Order, but he has taken the first step away from bot-aspirancy. Is there hope for him yet?
Posted by MinerBumping at 03:01