Every other day, a new "hero" appears on the scene, declaring that he will save the miners.

These false saviours can do little more than stand and watch as our brave soldiers destroy the wicked bots and bot-aspirants.

Twitchy McTwitch learned a harsh truth about game mechanics and about the Knights of the Order. Our battles are always brief, but eventful. It's hard to intervene. In Twitchy's defense, Moratio Hita was probably AFK, which makes it difficult to call for help. 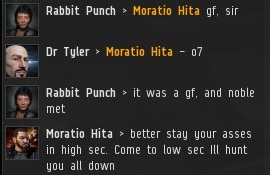 Nothing wakes up an AFK miner quite like having his ship go boom. 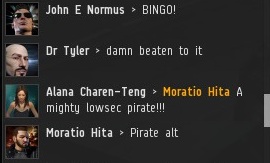 Moratio declared himself a dangerous rogue--someone you wouldn't want to meet in a dark alley of lowsec. Much to his surprise, the New Order Agents he threatened had heard it all before. 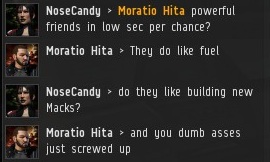 It's funny, isn't it? You'd never suspect that everyone mining in the ice field is a fearsome pirate. 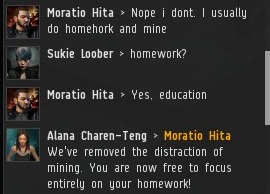 Moratio protested that he wasn't really AFK, he was just busy doing homework.

He vowed revenge. What horrors would his "main" unleash? Had the New Order finally met its match?

Moratio chose not to unveil his main just yet. Instead, he decided to go the more popular route and whine in local about our cowardice. He couldn't be further from the truth--the New Order walks all over highsec each day with growing confidence!
Posted by MinerBumping at 03:31