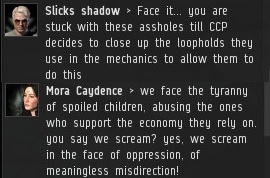 If you've been following MinerBumping for awhile, you might look at a comment like Slicks shadow's and think he's talking about our ability to bump miners. But you would be wrong.

That's right, our man Slicks wants CCP to close the "loophole" known as "suicide ganking". According to him, our Knights exploit the fact that someone with -10 sec status can fly into a highsec system and not immediately die. 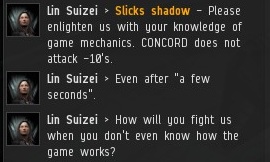 Agent Lin Suizei attempts to educate him: People with low sec status are chased by faction police. Only if a criminal shoots someone does Concord appear. Slicks would prefer our Knights be Concorded immediately upon entering highsec--so they can never shoot miners. 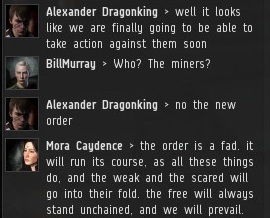 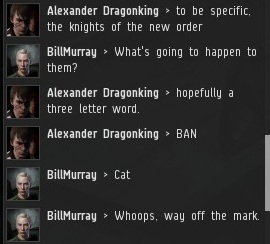 We're all going to be banned! The basis of this rumor, as with so many other false reports of New Order bannings, are murky. Alexander didn't share his source. 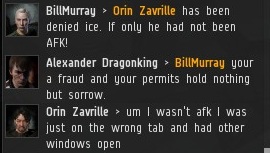 I've often said that the carebears are not interested in balancing the game mechanics or merely making it more difficult to kill exhumers. Instead, I believe the carebears simply want to remove all ganking from highsec. After countless nerfs to ganking, they almost succeeded; the suicide ganking of miners nearly ceased after the exhumer buffs. When the New Order brought miner ganking back, it offered an excellent opportunity to test the beliefs of these carebears. 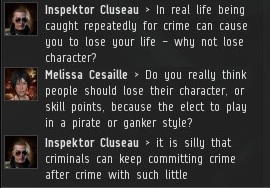 Behold, self-appointed carebear-in-chief Inspektor Cluseau, who feels the penalties for criminal activity aren't great enough yet. The proof? The fact that people still commit crimes. As I said, carebear whines will always continue for as long as their deaths do. 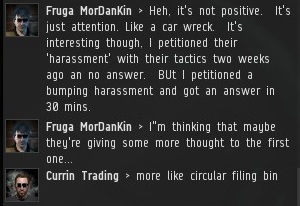 Miner Fruga MorDanKin holds the distinction of having petitioned both of the New Order's favorite tactics: bumping and ganking. When he shared his experiences, we got a rare insight into the petition system. Apparently petitions for bumping are dealt with in a very timely fashion these days. But Fruga also petitioned the ganking of his ship, because he assumed it was against the EULA for spaceships to shoot each other. 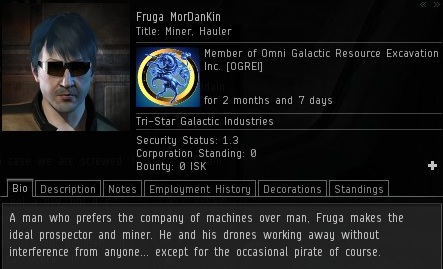 It doesn't take much to figure Fruga out: His bio is about as bot-aspirant as any I've seen. In the end, EVE can be a game for humans, or for machines. It should be no surprise that the carebears feel the way they do about ganking. Bots can't compete with humans when it comes to PvP, just as humans can't compete with bots when it comes to 23/7 mining. Therefore, bots and bot-aspirants want to remove PvP from highsec. In the same way, pro-human players want to remove bots from highsec. Which side are you on?
Posted by MinerBumping at 01:37