We all know that the Code requires miners to be courteous in local and refrain from the use of profanity. So does the EULA, sort of. On occasion, rebel miners are reported to CCP for abusing their local privileges. 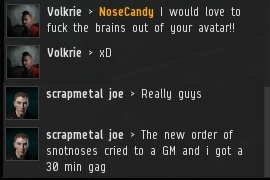 scrapmetal joe was stunned by the punishment he received: Thirty whole minutes without the ability to speak in local. 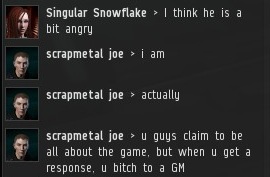 scrapmetal didn't like the idea of CCP getting involved in the conflict between the New Order and the miners. Perhaps that's because the New Order always follows the rules, while the increasingly desperate miners are more willing to tread outside the lines.

For months, the Agents of the New Order have been the subject of petitions from literally hundreds of miners--perhaps thousands, by now. Miners have openly advocated changing the rules to ban New Order activities, including both bumping and suicide ganking. But when the miners get petitioned, their attitudes about CCP change dramatically. 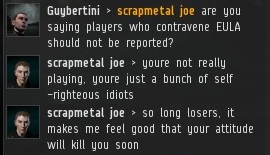 scrapmetal vowed revenge, which would be coming Soon™. At this point, miner vengeance has to be considered some kind of vaporware. 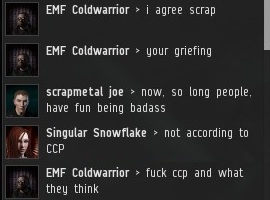 Having spoken his peace, scrapmetal prepared to depart from the scene. 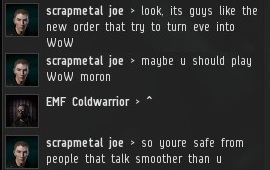 ...But he didn't. scrapmetal continued to complain, arguing that CCP is the only thing that stands between him and the ability to smooth-talk us into oblivion. Before you know it, the New Order will turn highsec into a risk-free theme park MMO. 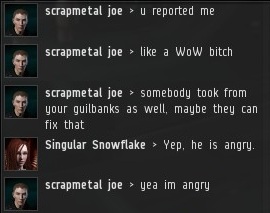 Sometimes letting off some steam helps people cool down. Not so for scrapmetal. He had been gagged for thirty minutes, and now his rant about it threatened to go on longer than the gag itself. 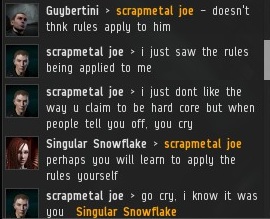 scrapmetal was convinced Agent Singular Snowflake was the one who ratted him out to the authorities. Our Agents are indeed hard core--hard core for the Code.

With the eye of CCP ever upon him, scrapmetal's powers were severely diminished. He wouldn't be able to take down the New Order alone. 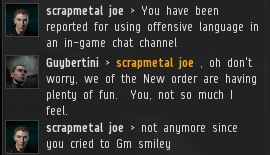 scrapmetal quoted GM Smiley, who had administered the gag. The words were seared into scrapmetal's soul. 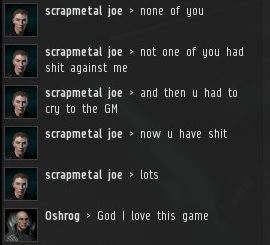 Could nothing end the pain scrapmetal felt about his 30-minute gag? He should talk to his AFK miner friends. They often go months at a time without saying a word in local.

The burden of having been gagged weighed heavily upon scrapmetal. Two days later, he returned to the system to announce that he was considering biomassing himself, for the sake of the other characters on his account. He also seemed to think it would serve as some sort of protest. 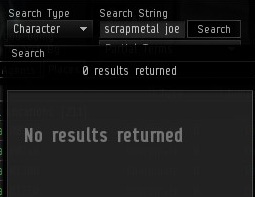 True to his word, scrapmetal joe self-immolated, the nearly one year-old character permanently erased from EVE. Rest in peace, scrapmetal. Local won't be the same without you.
Posted by MinerBumping at 20:12