The Price of Interaction 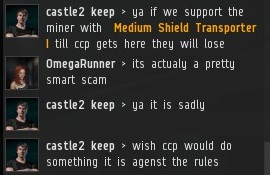 Another day, another heated discussion among the carebears about how to stop the New Order from transforming highsec into a paradise. 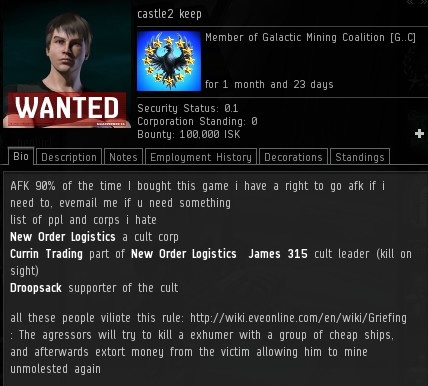 Meet castle2 keep. By his own admission, he is AFK 90% of the time. The other 10% of the time he complains about stuff in local, or in his bio. He strongly believes the New Order is in violation of the EULA. 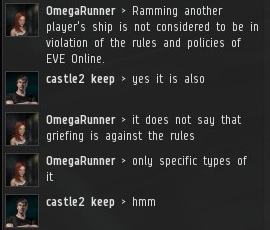 castle2 is confident that bumping and ganking are both against the rules. But when fellow miner OmegaRunner says otherwise, he begins to doubt his long-held beliefs.

If it's not against the rules to interact with AFK miners, then it should be. Otherwise, castle2 will quit the game. And the EVE community wouldn't want to lose someone who idles in highsec ice fields 90% of the time, would they?

I often warn people that EVE has been infected by carebears with an alien ideology. castle2 confesses his belief that highsec should have no PvP--unless both sides agree to it. Never mind the fact that by entering New Order territory (0.5 security and above), he is deemed to have agreed to the Code, and he forfeits his ship(s) by not obeying it. 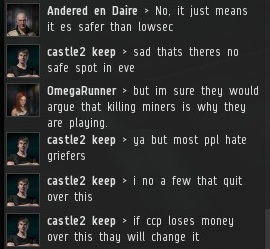 Like many carebears, castle2 is confident that with enough whining, CCP will bend to their demands for the sake of subscription fees. Nothing new there. What's more interesting to me is the fact that castle2 says he knows people who quit because of the New Order's attacks. In other words, castle2 knows people who are even more thin-skinned than he is. A scary thought! 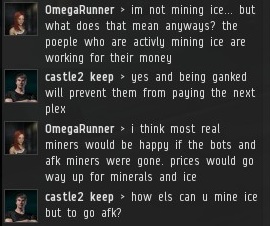 This is why education is so important. How can miners learn to follow the Code if they begin from the assumption that AFK mining is the only possible form of mining? castle2 can't understand how someone could sit in front of their keyboard while their ice harvesters are active. 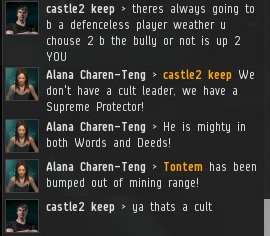 Over the past month or two, the references to the New Order being a "cult" have increased dramatically. I challenge any miner who feels that way to join the New Order family and do what I tell them. If, after a year or two, they still think we're a cult, I'll be shocked. 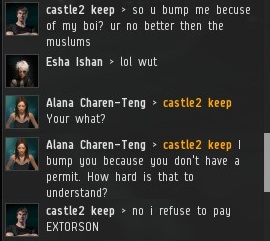 As far as I know, castle2 still hasn't quit EVE yet. But if CCP doesn't act quickly, we could wake up one day and find ourselves with one less AFK miner in highsec. Is that a price we're willing to pay, just to allow people to shoot at spaceships?
Posted by MinerBumping at 18:22