Conversation with a Rebel Leader, Part 2

After Agents of the New Order reported a rise of insurgent activity stoked by rebel leader Heavy Met4l Queen, I decided to put diplomacy to work and engaged in a private convo with HMQ herself. But my plans to negotiate her surrender went awry when she hijacked the conversation into a detour about her Asperger's syndrome... 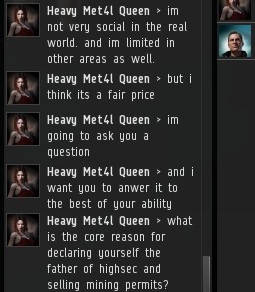 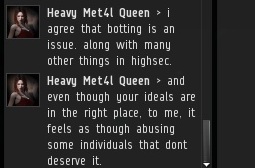 Interestingly, the self-proclaimed leader of the rebellion herself had to concede our ideals are in the right place. But there were a few provisions in the Code to which she objected.

Then there was the matter of requiring all miners to pay a 10 million isk mining fee. 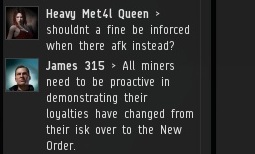 But as we know, miners need to free themselves from being controlled by their isk; they exercise power over it by sending the money to the New Order. I explained that paying the fee benefits the miners more than anyone else. 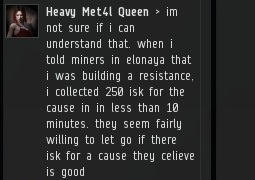 HMQ pointed out that miners will give isk to a cause they believe in, and inadvertently provided some intel: The miners of Elonaya had donated 250 (million) isk to fund the rebellion. A sign of desperation! 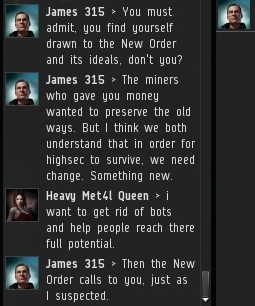 I could sense that HMQ wants change. This sets her apart from the botters and AFK miners who form the body of the rebellion. However, HMQ had a dream of her own:

Unfortunately, I had to explain that her dream had already failed and wasn't worth trying. I tell people the truth, even when it's not easy or convenient to do so. 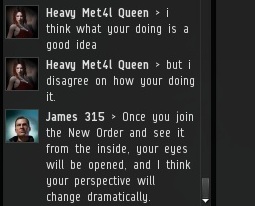 My openness and honesty encouraged HMQ to do likewise. The rebel leader confessed that she was interested in switching sides to join the New Order, but that she was obligated to the miners who were counting on her to defeat me. Since she was intent on continuing the fight for the time being, she asked that I grant mercy to her corp's members: 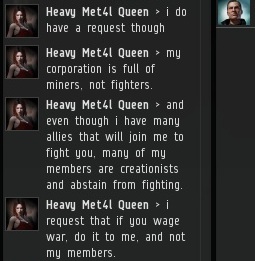 I responded by offering an amnesty program, which is very similar to the offer that I give all miners that I find in the ice fields of highsec: 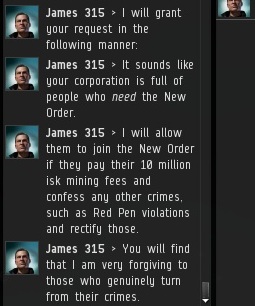 But would HMQ balk at the idea of her corp's members switching sides?

The rebel leader offered to pass along the proposal to her corp's members, but she couldn't force them to undermine her rebellion; she could only suggest it. Given my mission to conquer all of highsec, I was keen on acquiring all of the rebel forces into the New Order, so the negotiations continued...
Posted by MinerBumping at 02:02