Earlier this month, I shared the tears of a Russian miner who did his best to threaten me in broken English. I also briefly shared the history of the general reputation Russian players have in EVE. 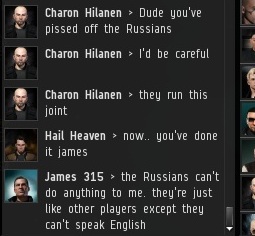 Though I suspect the miners above were being playful, there are those who are genuinely intimidated by Russian-speaking pilots. In today's post, I would like to take a look at what Russian players actually say when I bump them. Luckily, I happen to speak fluent Russian.

Actually that's not quite true--it would be more accurate to say I speak no Russian. Never fear! Behold the power of Google Translate!

Anyone who's used websites like Google Translate knows that they are far from perfect, even under the best of circumstances. Now add in the problem of local chat in EVE, where players frequently make typos. Google Translate does offer alternate translations for terms and will make suggestions in the case of words they suspect to be misspelled, however. So let's give it a shot! Russian-speaking readers are invited to offer their evaluation of Google's accuracy.

You might guess from all that exclamation points that Blek hiwa has strong feelings about what's happened to him. Google says,

Google was helpless to determine the meaning of "Svali".

This one's interesting, as Google has alerted us to what looks like a Red Pen violation!


I wrote a petition, making the USSR bury me, I'm going to kill with his bare hands if not stop bampat. All a successful farm.

The apparent reference to the USSR, along with "bury", makes me think of the "We will bury you" speech. I can't tell from the context, but I assume he intends to kill me with his bare hands in-game. I'm guessing "bampat" means "bumping". My interpretation of the "farm" remark is that either Blek or his friends are successful isk farmers.


Block scammer and pay not a penny... Sorry for the grammar. So it is necessary.

This line has two plausible translations:

Google offers an alternate translation, "in LAN stinks". He could be complaining about local chat, or his internet connection. I'm guessing the former.


I'm sending you rays of diarrhea.

A ray-gun that fires diarrhea? Fascinating!

But now it looks more like he's suggesting the use of manure instead of isk to pay the mining fee:


You can pay with manure? I just collected 10k tons.

You might ask why players like these don't simply use their own translators to try putting across their message in English. Universal, and his friend, Sam Vega, eventually tried to do just that.

Surprisingly soft, but the insubordinate tone is clear.

The "Gaylord of Bump"? What, no more "Mister Breivik"?

After I left, Sam commiserated with his fellow bumping "victims". Anyway, I hope today's post has helped to demystify our Russian-speaking friends and build a bridge of cultural understanding. When you get right down to it, we're really not so different. What matters is not the place of a man's birth, or the language he speaks, but whether or not he follows the Code. Thank you all.
Posted by MinerBumping at 20:12