Today marks the three month anniversary of the New Order of Highsec, proclaimed in Halaima (via EVE-O) on June 24, 2012. No one could have asked for a more thrilling three months.

Like so many revolutions in history, it all began with one man's dream to make the world a better place. In this instance, the dream involved bumping miners out of range if they failed to meet my standards for proper highsec behavior. With an initial 100.00% of miners failing to abide by the Code, it was clear that a lot of work needed to be done. Because of the strength of my conviction, I was willing to take on this monumental task by myself. But I didn't have to.

Highsec has already begun to show the early signs of a great transformation. My dream wasn't mine alone; it represented the highest aspirations and ideals of highsec. It was inevitable that others who saw the need for change would flock to the cause. All I needed to do was demonstrate that the New Order and the New Halaima Code of Conduct are the real deal. So I bumped miners out of mining range. That simple act of compassion and humanity changed everything.

More than 130 shareholders have invested more than 12 billion isk into this effort. Billions in mining permits have been sold by Agents enforcing the Code across highsec. I am personally aware of a few dozen different Agents, but no one knows how many there are; some choose to work in dignified silence, helping their local communities. I receive EVEmails on a daily basis from new supporters voicing their enthusiasm and pledging themselves to the cause. Entire corporations have declared loyalty to the New Order. MinerBumping.com, barely more than a month and a half old, is already among the most widely-read blogs in EVE.

Each day we grow more powerful. The forces of botterdom and the status quo shudder in fear. Reams of petitions have been filed against us by miners begging CCP to save them from our Invincible army. Every one of those petitions has been rejected. Billions of isk have been lost by miners fruitlessly throwing their failfit ganking ships against our bumping ships. Hundreds of AFK miners find themselves enjoying their AFK activities a little less, unable to avoid the doubts creeping into the back of their minds about whether they are still in range.

I want to express my sincerest appreciation to the countless Agents of the New Order whose acts of courage continually win the respect and admiration of highsec. As we go about our business of changing miners' lives for the better, we are winning hearts and minds.

As a token of my gratitude for the past three months, please accept another signed portrait of the Saviour of Highsec, suitable for framing, emblazening on the back of a suit jacket, or whatever: 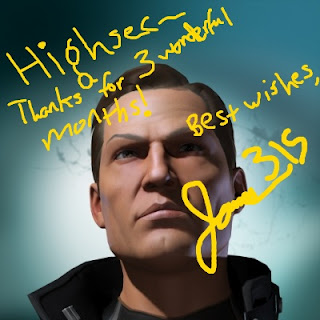 To those who continue to oppose us, I offer this message, spoken with the same depth of feeling for each one of you as if I were able to cross your threshold and speak to you myself: On June 24, 2012, highsec changed forever. You know in your heart that there is no going back to the way things were. The New Order is the future. For your own sake, do not continue to torture yourself by searching in vain for ways of stopping us. The Agents of the New Order are the best friends you'll ever have in EVE. Stop living in the past, and join us. I can't tell you how often I hear from people who originally stood against us, but found themselves being won over and switched sides. Embracing the New Order is the best decision you'll ever make. Do it today!
Posted by MinerBumping at 16:06