It was a day like any other. Halaima, the capital of the New Order, was host to a couple of new Agents, Undeniable Chuck and iskbadger. They were helping miners get with the program, when suddenly... 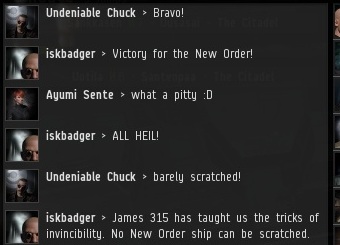 Yet another attack. Bumpers are the most courageous of EVE players, because they put themselves on the front lines every day. Since the New Order is the legitimate authority in highsec, violence against our Agents must be considered treason.

An insurgent launched four simultaneous suicide attacks against Undeniable Chuck's stabber. It was an act of desperation and cowardice. As usual, the New Order was victorious. Against... a quartet of moas?

The locals were thrilled to hear that peace was restored.

Not long after the dust settled, I happened to stop by Halaima. 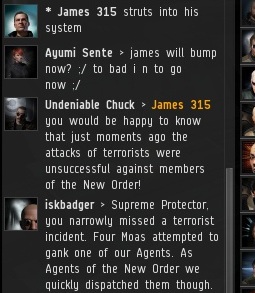 The linked killmails revealed the fit of the moas: 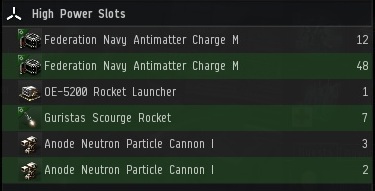 Using named modules and faction ammo, the four moas and their gear totaled 60 million isk. Moas are not generally favored for suicide ganks, given their use of split-damage types and the fact that their bonuses are to shield tanking and optimal range--no bonuses to damage or rate of fire. But the ganker in question had four accounts, and I suppose he decided that if he was gonna go moa, he should go all-in moa.

The ganker blamed his failure on the meddling of Agent iskbadger, who was flying a bumping machariel and shot at the moas when they were flagged. Clearly the answer is to bring the moas back for another try and hope for better luck. 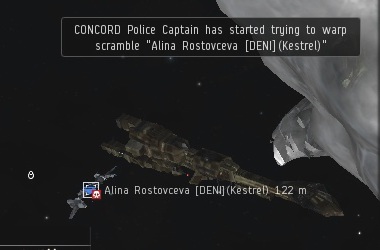 Shortly afterward, a random ganker stopped by and tried to kill me with a kestrel. Four Concord squadrons were still patrolling the ice field due to the moa scare. The kestrel's attack never really got off the ground, to be honest.

The moas carried the hopes of rebellious miners all over. These hopes were crushed. There is only hope in the New Order.

Much later that day, some miners remarked on the presence of Concord in the ice field. Concord used to be the miners' constant companions, but since the exhumer changes and the drop in ganking, Concord is a rare sight. Now they only mark unsuccessful attacks against the Agents of the New Order.
Posted by MinerBumping at 18:01