The New Order Takes a Stand Against Bullying

Shortly after the conquest of Uotila began, I spent some time doing a bit of a "meet and greet" with the local ice miners. Things went amiss. Many of these miners were AFK, so it was quite difficult to meet and greet them until after they returned to discover their mackinaws had been bumped out of mining range.

Miner Sherlock Aubrey wanted to know more about the Code I was enforcing, so I politely informed him of his new responsibilities as a New Order resident. 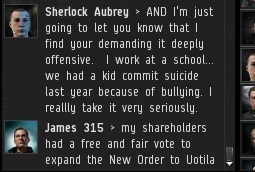 Unruly miners tend to lack creativity and recycle the same set of lines and excuses all across highsec--so much so that I created Miner Bingo to help Agents make lemonade out of the lemons. References to bullying are common, but Sherlock put a new twist on it. 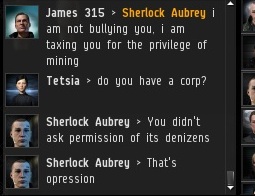 After declaring his dissatisfaction with the new regime, Sherlock explained that he was exempt from following the Code for unique psychological reasons:

This seemed to be some kind of equivalent to getting out of school with a doctor's note. Only without a doctor, or a note.

I was skeptical. I had not heard of many school children enforcing the New Halaima Code of Conduct. Perhaps it was a parochial school? 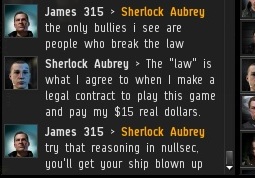 In reality, the only "bullies" are those who attempt to throw their weight around and act like they are above the rules. 'Tis the primitive doctrine that might makes right. The New Order stands against this philosophy on principle. The New Order also has more might than anyone else!

Still, I didn't want to see this "bullying" excuse catch on. If miners thought they could invoke a catch-phrase to get out of paying their mining permit, they would all copy it. Because I am merciful, and because I care about the miners, I decided to cure Sherlock of his affliction. A normal therapist might coddle him and leave him uncured, taking his money away in the process. There was no time for that. Luckily, I am an "unconventional" space therapist, and I deliver the commonsense, no-nonsense, tough-love kind of therapy that cures all ills in one quick dose: 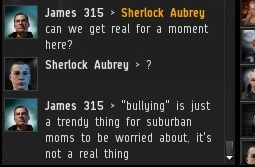 That seemed to do the trick. Sherlock realized discretion was the better part of valor and docked up. I didn't get my 10 million isk from him, but that's something to work on in future sessions.

The inherent bullying nature of people who refuse to follow the Code is disturbing, and perhaps part of a trend in our ice fields. As supporters of the New Order, it's our job to keep highsec a safe, welcoming environment for everyone. As always, the Code shows us the way.
Posted by MinerBumping at 01:19