Pursuant to the latest shareholder vote, the New Order officially annexed Elonaya, an ice mining system in the Lonetrek region. Click the map below to see the latest map of New Order territory:

As is my custom, I announced my presence first by anchoring some containers with useful information at a distance from the ice field.

Concord was on high alert, still patrolling the area where terrorists launched simultaneous attacks against Agent Tubrug1 just hours before. I knew I had to project confidence and calm to the good people of Elonaya. I declared that the New Order had taken the system, and that anyone who wished to purchase mining permits could do so for 10 million isk. 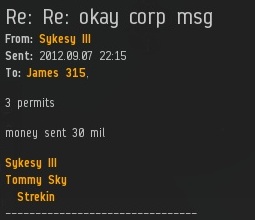 I immediately received an EVEmail from a miner who wanted to arrange payment for himself and his two alts. Within minutes of my arrival at Elonaya, I had sold my first three permits. This was a good omen. Then miner Sykesy III took it a step further, asking to purchase 40 million isk worth of shares in the miner bumping business. After the transaction was completed, he asked me for advice on how to fit a bumping stabber, so I directed him to this post.

Miners, if want a role model for adjusting to the change we bring to your systems, look no further than Sykesy III. 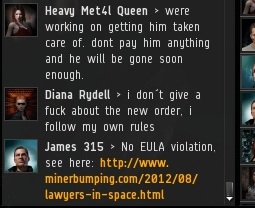 In an instant, rebellious miners were looking to organize opposition to the New Order. 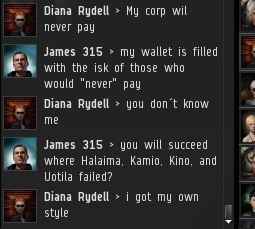 It was the same old story--miners thinking they would fare better than their counterparts in the other systems we have taken.

Rebel miner Heavy Met4l Queen stood up, identifying herself as a leader of the opposition. Having read the Lawers in Space post I linked, she understood that the New Order complies with the EULA. So she claimed she would have miners petition CCP to change the EULA, adding an anti-bumper clause. 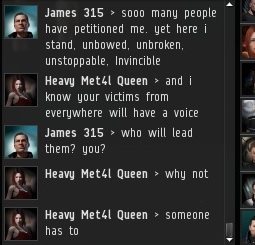 If only that passion could be directed toward something constructive, rather than something so futile.

As other miners awoke from their AFK slumber to find their ships out of range, they took an interest in reading about the New Order. However, they were convinced that all of the 100+ shareholders of our noble enterprise are actually my alts. 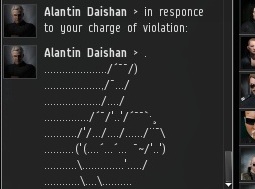 Others simply voiced their disapproval with the new rules. 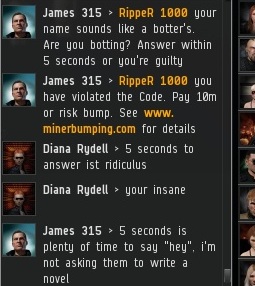 Clearly, there is much educating and healing to be done in Elonaya.
Posted by MinerBumping at 18:26