The Redemptive Power of the New Order

For the professional miner bumper, there's nothing more fulfilling than seeing a wayward miner finally come back into the fold and join the New Order. (I say "come back", because in theory all miners begin playing EVE as members of the New Order, since they have not violated the Code yet.) And what could be more rewarding than seeing a member of the dreaded Red Pen list turn over a new leaf? 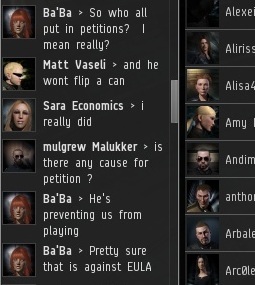 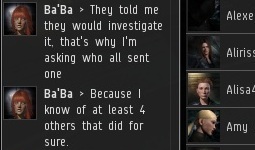 You may remember Ba'Ba, one of the miners implicated in the plot to petition CCP to permaban me back in August. If her name doesn't ring a bell, this memorable remark of hers might:

As a petitioner, she joined the Red Pen list, which trebled her mining permit fee to 30 million isk and put her at increased risk of being bumped. One might assume, given her history, that she was beyond all hope. But that would be underestimating the power of the New Order. I received the following EVEmail from Agent Steve the Pirate:

Steve included attachments as proof of his heroic deed. 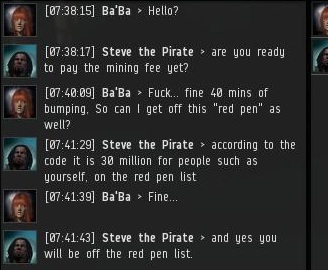 I'm sure you'll agree that it's a moving experience to watch such a transformation. If Ba'Ba can see the error of her ways, then there's hope for every unruly miner in highsec. But don't forget, a miner can't be made to live up to his or her full potential without an Agent of the New Order to guide them.
Posted by MinerBumping at 15:36