Follow-Up Treatment for a Troubled Miner

Several days ago, I wrote about an altercation I had with a miner named ARCHANGEL141 ARCH. He disputed my right to mining fees and ended up getting one of his corpmates killed while trying to attack me. ARCHANGEL141 had difficulty speaking English and relied heavily on the use of profanity.

But when a miner fails to get with the program, the story is not over. If we're to create a paradise in highsec, we need everyone involved. That means rebellious miners like ARCHANGEL141 need follow-up sessions until they're cured. 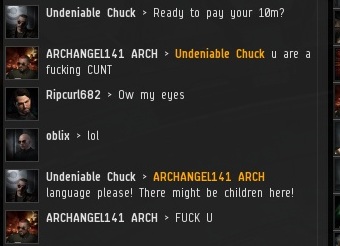 Agent Undeniable Chuck was on the case. 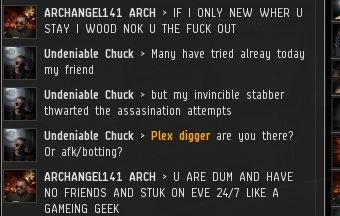 There were no signs of improvement in ARCHANGEL141's condition. He still had anger issues, and he still bitterly clung to the delusion that an Agent of the New Order could be killed.

He also had trouble building and maintaining friendships. 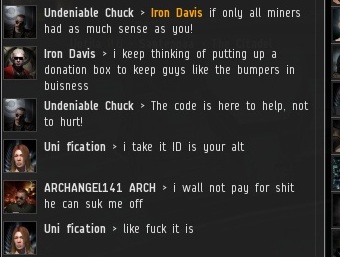 It's a matter of some controversy, however, as other miners want to keep to the old ways.

The language barrier may be slowing ARCHANGEL141's progress somewhat.

ARCHANGEL141 has a long way to go. By petitioning CCP to permaban Agents of the New Order, he has suffered a severe relapse. Diagnosis: Needs more bumps.
Posted by MinerBumping at 18:31