The Last Temptation of Sara Economics

The recent spike in botting caused by the exhumer rebalance is difficult for highsec miners to ignore. Of course, it can be difficult to tell the difference between a botter and an ordinary miner these days, given how little an AFK miner contributes to the EVE community.

The lack of any distinction between the bots and bot-aspirants has tempted many miners to join the dark(er) side. 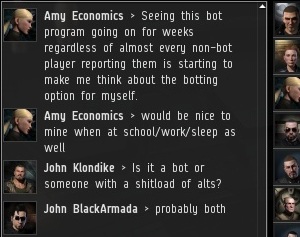 Even a pillar of the highsec mining community such as Sara Economics (posting here on alt Amy Economics), has been drawn toward the siren song of the bot. 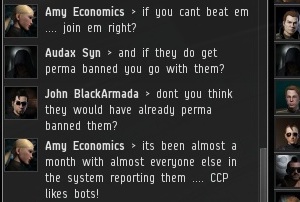 Ms. Economics is viewed by many rebellious miners as a leader of the anti-New Order movement in the Kino system. While these miners may point to her as a shining example, we know better. Sara has a rap sheet as long as my arm: She was implicated in the plot to get me permabanned from EVE, joked about the possibility that I might commit suicide in real life, and helpfully chimed in on what Kino miners called the "conspiracy to eliminate James 315".

But now her refusal to join the New Order of Highsec has led her down a truly twisted path.


Sara Economics > ccp does nothing about these bots :( .... I'm on the fence if I should look into 3rd party softwear too 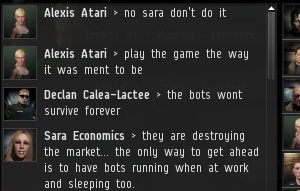 As everyone understands by now, AFK mining is a gateway drug for botting. It's absolutely essential that miners follow the New Halaima Code of Conduct if they are to remain sober. Let's continue to bump them in the right direction!
Posted by MinerBumping at 20:06