Conversation with a Rebel Leader, Part 1

They say more systems in EVE have been won with EVEmails than with guns or missiles. In conquering highsec, the New Order recognizes the importance of effective diplomacy, and will employ it at any opportunity. On a more personal level, I believe in building bridges rather than barriers. Thus, when I saw the rise of Heavy Met4l Queen's resistance movement--and the propaganda they have been spreading--I knew I had to at least try to establish a line of communication.

I have had occasion to speak to the leader of a hostile corporation before, though it didn't go so well:

Though the peace negotiations with Ahkala Dheorin's corp failed, they actually did surrender to the New Order not long afterward. So reaching out to Heavy Met4l Queen (HMQ) was worth a shot. 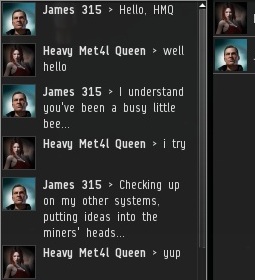 I made it clear that I knew the score. But I wanted to begin by making it equally clear that I was not the sinister villain she thought:

I wanted to emphasize what united us, rather than what set us apart.

Then I made my offer: If she surrendered to the New Order, she would receive a place of prominence in Elonaya. 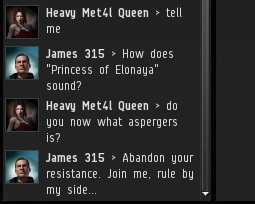 Though she started to interrupt my pitch with some reference to Asperger's syndrome, I soldiered on. 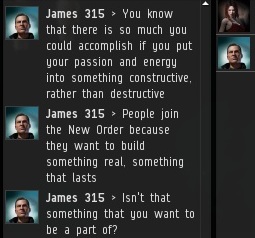 Surely, this was an offer that would not be easy for a rational actor to refuse. 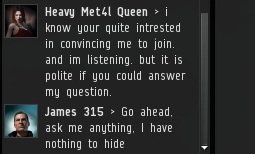 So far, so good. The Asperger thing sort of threw me for a loop, but we were making progress. 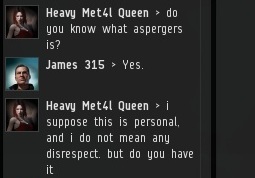 A disappointing development. I had come to HMQ in good faith, and all I received in return was some jibe about Asperger's. Or so I thought.

The peace negotiations between the New Order and the resistance had taken an unexpected detour. 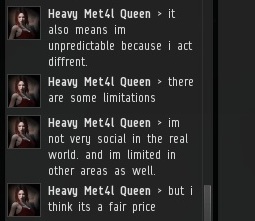 I wasn't sure where this was going. But one thing was certain. For the New Order diplomatic team, it was going to be a long day...
Posted by MinerBumping at 00:10