Welcome to another edition of the Grab Bag! It's time to chill out, relax, and enjoy drinking in another collection of miscellaneous miner tears. 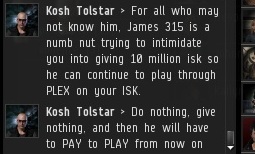 Miners have pursued a wide variety of different strategies for defeating me. So far they've all come up short. I have to give Kosh Tolstar some credit for his originality: If miners stop paying me for awhile, maybe my subscription will run out! 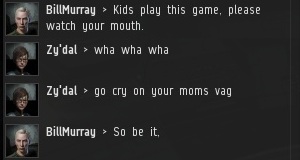 Here's a good example of the Internet Tough Guy Syndrome and how rapidly it can be cured with bumping. Agent BillMurray transformed the miner within 60 seconds:

Next is a series of curious communications from Sam Vega:

First he sends me an EVEmail calling me "mr. breivik". 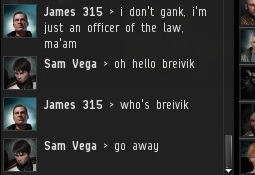 Later, when I bumped him out of the ice field, he did it again. 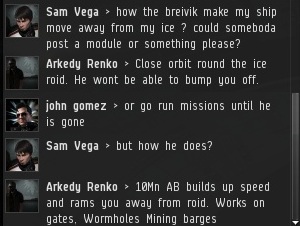 Even when I'm not around, he calls me "the breivik", and the others--while offering unhelpful advice--seem to know what he's talking about. Sam's reference is to Anders Behring Breivik, a Norwegian mass murderer who killed several dozen people and injured hundreds more. I guess that's better than being compared to Hitler?

Another creative way to counter my bumping strategy. So far the FBI has rejected any petitions filed against me, I presume. 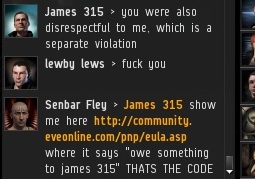 Poor lewby lews doesn't get it. There's more than one way to violate the Code. 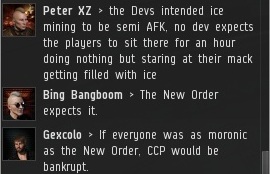 What some miners don't realize is, we hold them to a higher standard than CCP does. Miners should consider it a compliment that we have such high expectations for their behavior. 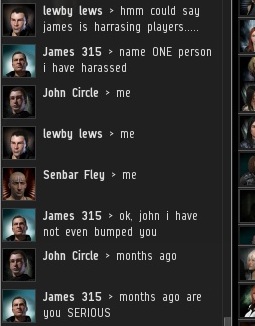 Like I told an Agent the other day, miners never forget being bumped.

As of this writing, "AFK ice miner" does not qualify for protected minority status. 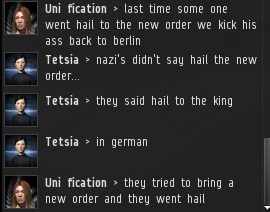 Well, the Breivik comparisons were a freshing change of pace, but it's pretty much inevitable that some miner will compare the New Order to Nazis.

More fan mail from the locals. When the subject line simply reads "maniac", I know I'm about to get some well-thought-out, constructive criticism about my governance of highsec.
Posted by MinerBumping at 23:40