Tears of the Day: From Russia with Love

Today's story begins like so many others. I was in Kamio, a system of the New Order, and was exercising my right to bump non-compliant miners out of the ice field. Suddenly I received an invitation to a private convo. It was from andrey beiiy, a miner whom I had just relocated after he failed to respond to my friendly questions in local. I recognized the name instantly, since a few days earlier he had sent me an EVEmail that was featured in Highsec Miner Grab Bag #2:

Most people would decline a convo request from a person like this, but I believe in building bridges, not burning them. Besides, it is inevitable that he, like all other miners in highsec, will eventually join me as part of the New Order. Perhaps today was his day, and he was getting ready to apologize for his crimes.

Today was not his day. I spoke earlier of how I handle situations where the miner is not fluent in English. I do my best to remain patient and use simple, direct words that can be easily translated. 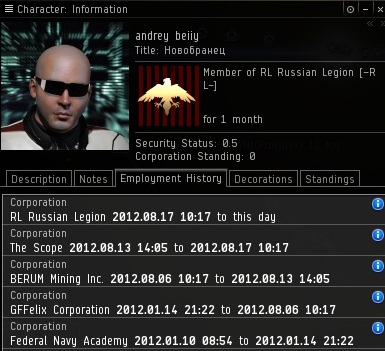 andrey is Russian. Once upon a time, Russians were feared all across EVE due to the formidable reputation of Red Alliance. The very sight of Cyrillic characters in local was enough to spook their enemies. A lot has changed since then.

I received a notification that andrey had set me to "terrible" (-10) standings. I guess when he sent the EVEmail about killing me I was only at -5. 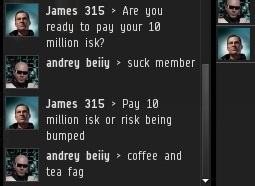 andrey did his best to smack-talk in a foreign language, but occasionally something was lost in translation. Does anyone know if "coffee and tea" is a Russian insult? 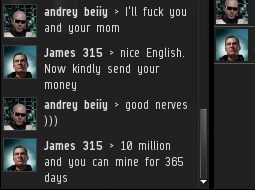 I repeated my generous terms, but andrey wasn't interested. Some people ask me what I feel when miners vent their rage at me. The answer is... compassion. I am overwhelmed by feelings of compassion. 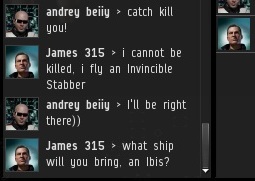 Now the threats. Just an FYI for those who find themselves in andrey's position in the future: It's hard to intimidate someone who can't be killed.

I challenged andrey to come and fight me, if he dared. Like many miners who get bumped out of the ice field, andrey was still in system, docked up and hoping I would leave soon. But did andrey have a combat ship nearby? And was he even capable of flying PvP ships? I asked him. 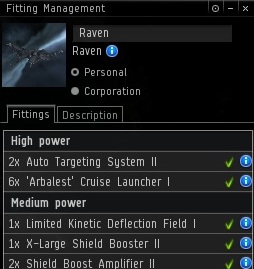 andrey answered by linking his raven fit. If he really was planning to duel me, giving me his exact fittings probably wasn't the best idea. In any case, I am unimpressed by ravens, and I told him so.

andrey had another ship, though; he gave me the schematics for his PvP drake.

When the sight of his drake fittings didn't have the desired effect, he sent me his tengu fit. 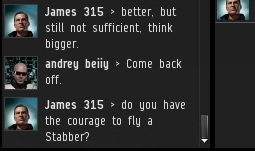 Apparently andrey didn't have a dreadnought or titan to duel me with, so he gave up his plans to duel me. 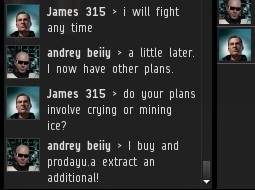 I encouraged andrey to return when he had sufficient courage. Perhaps he will put aside his missile ships and take up the art of miner bumping. I'm still waiting, but I know better than most that it takes time to change the world.
Posted by MinerBumping at 02:01