Tears of the Day: Biblical Cans

There are a lot of advantages to serving as Father of the New Order and Supreme Protector of various systems in highsec. I think what I enjoy most about these jobs is the community. I just love people. Frequently I will visit one of my systems and just say hello before I get down to the business of bumping errant miners. I connect with the community, engage with the people. They get to know me better, I get to know them better, and all benefit. 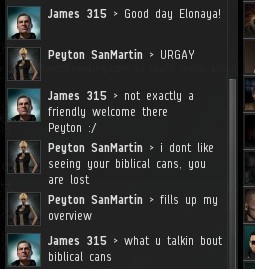 Yet with my privilege there comes great responsibility. When an issue pops up, I'm the one everyone expects to solve it. And within about five seconds of arriving at Elonaya, there was already an issue.

Right out of the box, ice miner Peyton SanMartin had a problem with me. I had not bumped or even encountered her before, but she was all fired up about something. 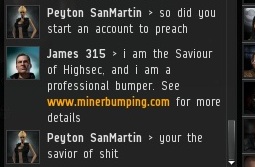 On occasion, my reputation precedes me, since my enemies do their best to spread vile propaganda. 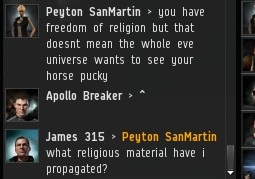 Peyton's hostility seemed more focused than the average miner's, though. Something had been bothering her for awhile, and I was determined to find out what it was.

Then I figured it out. The "biblical cans" she was referring to had been anchored by rebels in Elonaya a few weeks earlier. 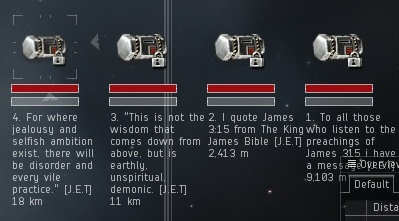 The full text of the six containers' message reads as follows:


To all those who listen to the preachings of James 315 i have a message. I quote James 3:15 from The King James Bible. "This is not the wisdom that comes down from above, but is earthly, unspiritual, demonic. For where jealousy and selfish ambition exist, there will be disorder and every vile practice." The New Order is false and its word and code ash. Deny them and all that they are. For Elonaya and her miners support Heavy Met4l Queen, Defender of Elonaya!

All this time Peyton had been mining, resentful of the "biblical cans", and when she saw a player named James 315 speak in local, she popped off. I tried to explain.

Peyton was deeply confused. She began accusing me of creating James 315 as an alt after being banned. 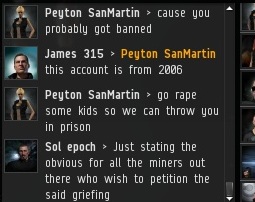 Peyton continued to vent her frustration with the preaching of those cans. Her agitation turned toward a rant about religious fundamentalism. 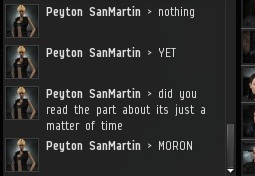 For a moment, Peyton calmed down.

I don't know what kind of personal experiences led to her to this behavior, but I doubt it involved miner bumping.

I made a harmless observation about my rights as Supreme Protector of Elonaya before I renewed the deportation of delinquent miners from the ice field. And before you can say "Code", Peyton had been set off again. 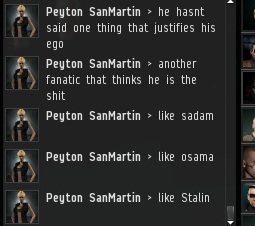 Peyton is a work in progress. I haven't seen her since, but wherever she is, I hope she is able to find peace, and a suitable representative of the New Order to whom she can pay her mining fee.
Posted by MinerBumping at 02:16