Today we revisit the Grab Bag, the repository for miscellaneous miner tears that don't quite make the cut for an entire blog post or "Tears of the Day" segment. So let's reach into the Grab Bag once more and see what comes out. 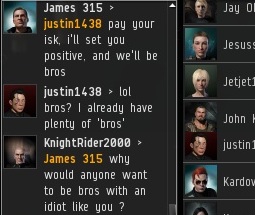 I think the operative question is, who wouldn't want to be bros with me?

Nothing gets miners up in arms more than defending the right to be AFK. Nevertheless, miners who leave their desks do risk bump. 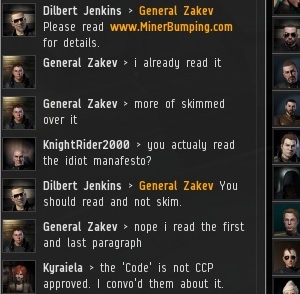 If only I had some Agents in CCP who could let me read the logs of a conversation like the one Kyraiela claims she had. She convo'd them about the Code? I wonder if they have form response by now, "CCP does not confirm or deny the teachings of the New Halaima Code of Conduct..."

Of course, the New Order of Highsec is a secular organization. 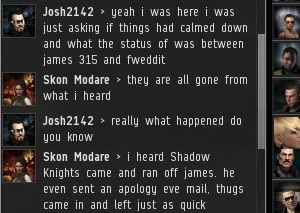 I got the above from an Agent who kept watch on the Kino miners while I was away. I'm glad for my extra eyes and ears in highsec, because all kinds of weird things happen when I'm not around. Apparently miners in Kino got caught up in rumors that a war was breaking out between the New Order and a group called "Fweddit". There's also the "Shadow Knights", which may or may not be related to this, and Skon Mondare says they ran me off. According to what she heard, I was polite enough to write an apology EVEmail to them. My reputation for courtesy must have fueled this--I have never seen or heard anything about a group called Shadow Knights.

Now it seems Shadow Knights are affiliated with NC dot. It's good to hear such a prominent nullsec alliance could take a break from their busy day losing space to Goons in order to launch a phantom war against me!

As you can see, this is not a screencap from EVE, but from your humble host's website! Occasionally angry miners will make the trek to the citadel of the New Order to leave a comment, almost always failing to sign their names to their remarks. When they are memorable enough, they qualify for the Grab Bag. Today's comments all come from the same post, "Avenging Bumps at Fanfest".

No fiery Chinese kids to report yet, by the way. Let's hope that trend continues!

This gentleman had a lot to get off his chest. So much so that he came back for a second round, during which he dropped the politeness and told me how he really felt:

To clarify, the above comment does not violate the EULA. He hopes that someone kills me in real life, or I kill myself, or some freak accident happens and I die, and that I don't breathe anymore and meet my demise... in-game. In-game, he means!

Would a visit to the Grab Bag be complete without a Hitler reference? I think not! Now let's end this post on a high note, by fetching some mail from my EVEmail inbox.

...in-game, that is. I do appreciate the courtesy of his repeating the exact same message in both the subject heading and in the body of the EVEmail. Makes it a lot easier to navigate my EVEmail that way, now that I'm a popular EVE personality.
Posted by MinerBumping at 02:10