'Twas another leisurely day in the domain of the New Order, otherwise known as highsec. A group of Knights and I responded to a routine call about an unlicensed miner in Ardallabier, next door to Brapelille.

The offender, Whitehound, was forced to hand over his Mackinaw to the outer darkness. He had just enough tank on his ship to avoid being podded before Concord arrived. However, Whitehound was a truly AFK miner. In his bot-aspirancy, he didn't even notice he had lost his ship. So his pod just sat there in the belt. 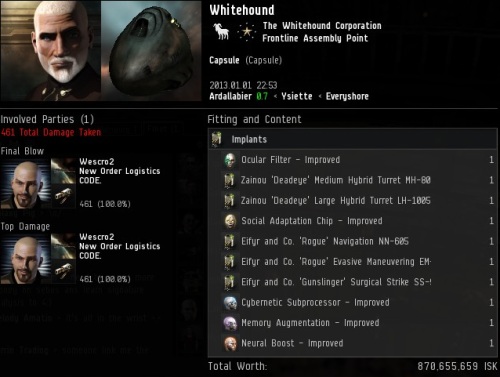 Seven minutes later, still idling in defiance of the Code, Whitehound's capsule was sent home. Agent Wescro2 was in charge of delivery. More than 800 million isk worth of implants was lost. Oddly, most of these implants were combat-related. I guess Whitehound was another one of those dangerous pirates who mines all day.

I tried to send him the standard termination notice so that we could help him get into compliance, but I was already blocked! 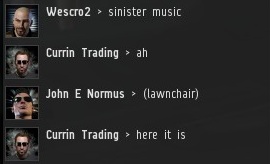 After Whitehound finally returned to his keyboard, I received an interesting notification, which I reported to the crew.

In his rage, Whitehound placed a one billion isk bounty on our alliance. 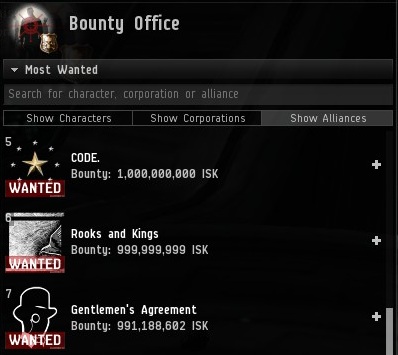 According to EVE's bounty office, this made us subject to the fifth-largest alliance bounty in the game.

Other Knights who weren't members of the alliance were also given bounties by Whitehound. 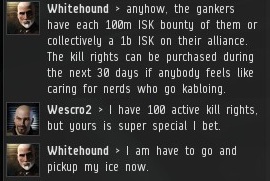 His revenge assured, Whitehound took his leave of the system to go pick up some ice. 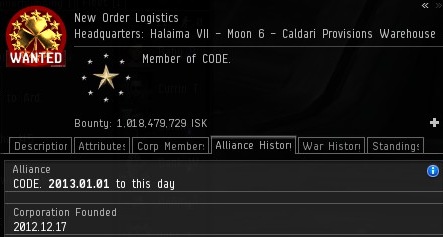 New Order Logistics had only been part of CODE. alliance for one day, and we were already pulling our weight. But what is this CODE. alliance, anyway?

CODE., one of the few alliances whose name is identical to its alliance ticker, is not run by me. It is the brainchild of Aria Stane and admiral root, who were already having fun wardeccing people with the Zantiu-Braun Alliance. They decided to create an alliance with the New Order "brand", if you will, on the theory that it would help attract incoming wardecs. Receiving wardecs is better than issuing them since it's free, and the aggressors can't call in allies.

I was happy to have New Order Logistics join their alliance and hopefully contribute some infamy. The corp's inclusion in the alliance does not actually change anything about the way we operate; since Knights are at -5.0 anyway, wardecs don't matter to us. Nor are there any security issues, since we still use our regular channels of communication.

I asked admiral root for some information about CODE. to assist them in their recruitment efforts. Unlike the New Order itself, which is more universal in its aims, CODE. will use a traditional model of recruitment, and will be based around highsec wardecs.

Their corporation in the alliance is Tolerancia Nihilum. They have not yet finalized the minimum requirements for admission, but have a list of four contacts, if anyone is interested in joining: Aria Stane, admiral root, thadyus, and eleq trizi't.

Judging by Whitehound's reaction, the association of their alliance with the New Order is already having the desired effect.
Posted by MinerBumping at 18:29