Miners Burn for the New Order

Though bumping is (obviously) a primary vehicle through which the Code is enforced, it's not the only one. Everything is fair game, so long as it can help guide a miner toward the path of reform and prosperity.

Some New Order loyalist corporations, such as Arctic Dungeon, have used wardecs to achieve peace and get miners to join the New Order.

Infiltrating miner corps and attacking the miners during their mining ops is also a useful tool. Several days ago I wrote about Agent Riku Klayton's use of this method to instruct an orca and a few miners. Afterward, Riku sent me a link to a video in which he recorded the attack. It's clear he took joy in giving those miners encouragement.

Another Agent, Orions Lord, prefers the can-flipping method. After using a procurer to kill a hulk in this manner, he sent the miner an EVEmail explaining the situation. 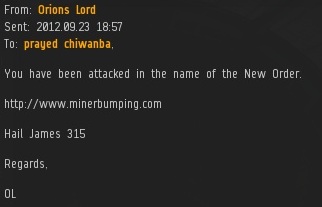 This was helpful, because it let the miner know the attack was not some random act of violence. It had purpose.

It remains to be seen whether the miner fully understood. 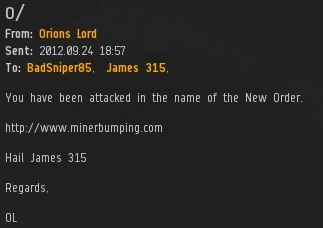 Orions Lord continues to let each of his victims know that their ships were forfeited due to their violations of the Code. 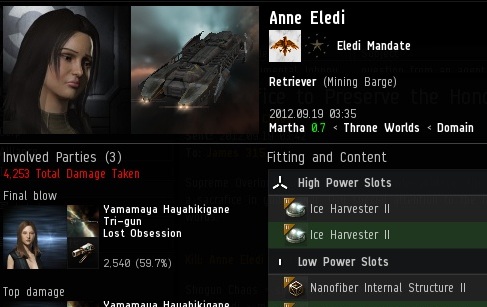 Agents Shogun Chaos and Yamamaya Hayahikigane attempted to reason with the miner, but they can be stubborn.

Our work will continue as long as it is required. It's also worth pointing out the diversity of tactics used by these Agents, and where they took place. Arctic Dungeon's wardecs usually occur in Lonetrek, Riku's corp infiltration was in Devoid, Orions was active in The Citadel, and Shogun launched his attack in Domain. Four different regions represented in one blog post. Whew! 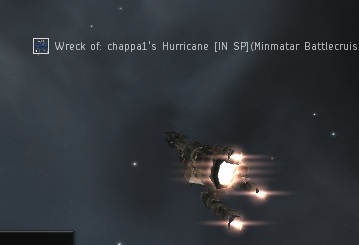 As for the Agents themselves, they have proven Invincible. Just the other day I was training a new Agent, who was flying a bumping caracal in Elonaya. 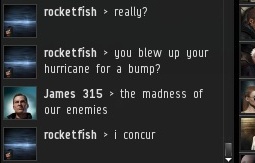 Scratch one enemy hurricane. The power of the New Order knows no limits. I received an EVEmail and chat transcripts from Agent Bing Bangboom, who was operating in Kamio. He was challenged to a duel by T Head, who was flying a Scorpion Navy Issue. Bing grabbed a Rifter and stole from T's can. Even a faction battleship was not able to destroy a tech I frigate flown by an Agent of the New Order:


The Scorp was shooting cruise missiles at my Rifter which was about 500 feet from him in afterburner warp. The damage was minimal but I wasn't doing anything to him. So I moved out of his scrambler and warped off declaring my miraculous survival (due to the power of the New Order and The Code).


Bing Bangboom > hey! I'm not dead yet
Gexcolo > Is bing one of those "Order" assholes?
Bihar > yes
Gexcolo > /emote sighs
....
Wilan > 2006 and coudln't roast that rifter? *shutters*
Bing Bangboom > now you all see the power of The Code. You may send me the 10,000,000 ISK and begin your life in the New Order!
Bing Bangboom > www.minerbumping.com
Tilaa Enkeli Charante > id rather kiss a frog then pay you 1isk...never gona happen
Bing Bangboom > Look here now. I was in a frigate and that was a Scorpion Navy Issue and he couldn't kill me.
Bing Bangboom > How can you explain that without the power of The Code?
T Head > ya and that is old news frig won't better a bs and the cruise missles are not designd from little shit ships figured you would have something better but it just figures
Bing Bangboom > All hail the Power of the New Order! Blessed are those who have seen and BELIEVE!

The New Order of Highsec, winning hearts and minds every day.
Posted by MinerBumping at 17:33