The New Order of Highsec's official territory has expanded again, annexing the Uotila system. Uotila is the last remaining system of The Citadel region that contains an ice field. Click below to see the most current map; see the Maps page for older maps.

This expansion was the result of our last shareholder vote. It was nearly a month ago that our shareholders gathered to vote on our next steps for expansion across highsec. By a relatively narrow margin, our shareholders voted to acquire Kino and then Uotila. Kino turned out to be a bit of a snakepit, but hey, I didn't get to be the Saviour of Highsec by turning down the tough assignments. For links to previous shareholder reports/votes, see the Links page.

Some quick notes on New Order territory: Agents have been conducting operations across highsec. So what purpose does New Order territory have? It is a magnet for Agents who don't otherwise have a preference about where to conduct operations. Uotila is our most recent conquest, but that certainly does not mean we are leaving Kino, Halaima, etc. It merely serves to put Uotila miners on notice. 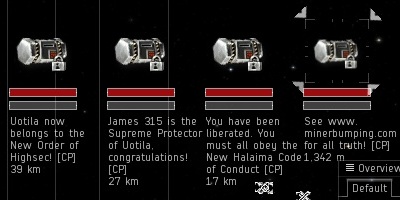 I began as I always do, securing some notices at a distance from the ice field. 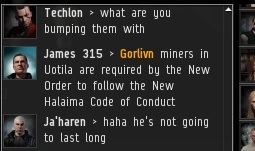 When I announced the news of Uotila's liberation from irrelevance, I was met by skepticism. The miners thought I would not last very long in this whole "bumper" business. If they only knew... 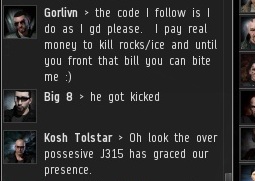 As it turned out, one miner did know better. 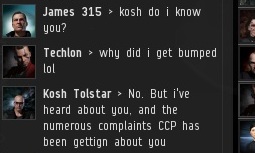 My reputation preceded me. 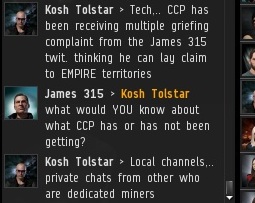 Poisoned against me by disaffected miners from other systems, it seemed. And the petition references meant that the lies and slander were being spread by the Red Pen club. 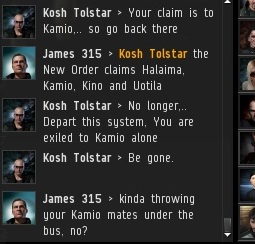 Desperate to be rid of me, the miner was all-too-willing to send me back to enforce the Code against his "friends". 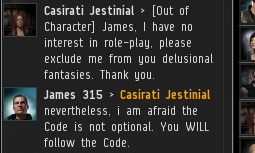 Most of the other miners had no experience with bumping whatsoever. They didn't even realize I could stop them from mining until it was too late. But that didn't prevent me from extending the hand of friendship and offering membership in the New Order to all who would pay.

As is so often the case, the Uotila miners thought they were unique. I asked them how they could resist the New Order when the miners of Halaima, Kamio, and Kino had fallen?

Alternatively, they refused to believe that any miners had ever paid Agents of the New Order before.

I have a feeling their beliefs about highsec are about to be tested.
Posted by MinerBumping at 01:25