From Poland with Love

Not so long ago, we took a look at Google-powered translations of Russian invective aimed against me. Because I'm all about building bridges, I decided to use the power of Google to help me connect in real-time with the next miner who spoke to me in a foreign tongue. 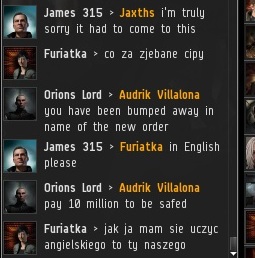 I encountered Furiatka in the Halaima ice field while I was bumping someone else. She began speaking in a language I didn't recognize. Google suggested it was Polish and automatically translated it for me.


What a fucking cunt (Alternate translation: What a fucked up cunt)

If Furiatka was capable of speaking English, I let her know I preferred it.


How can I teach English to you our

Google told me that the miner's name is Polish for "Madwoman". I wasn't sure what "Piczo" was. Google says it's a picture-sharing website, but that couldn't be what was meant. Regardless, I was sufficiently alarmed by the Code violations of Furiatka's previous statements to put her on notice.

I began bumping Furiatka and told her in Polish that she could no longer mine. At least, I hoped that's what I was telling her. 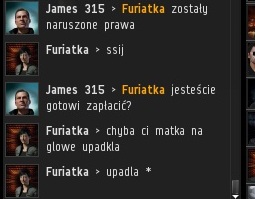 I told her that she had violated the Code and asked if she was willing to pay.


Unless your mother on the head collapsed 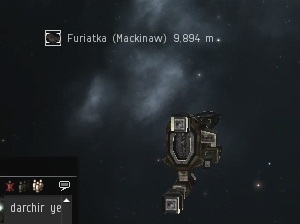 By this point, Furiatka was far from the ice field. She occasionally attempted to return, but always got bumped back into the penalty box. 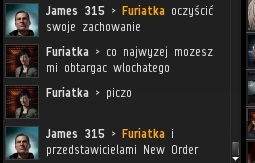 I told the madwoman to clean up her behavior, but it was of no use. There were some words I couldn't translate, but I got the gist. 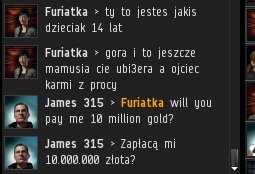 Apparently Miner Bingo squares can be achieved by miners across the globe.

...Though some things remain purely regional. 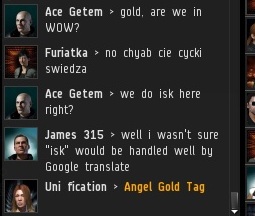 I wasn't sure how well "isk" would translate, so I asked if she would pay 10 million gold.


No unless your boobs itch

I stressed that the Code must be followed by all, from Halaima all the way to Poland.


As you are using Google Translate you are the cleavage head

I didn't need Google to tell me the substance of Furiatka's comment this time.

...A remark made more poignant by the fact that Poland was invaded by both Hitler and Stalin.

I asked again why she refused to obey. At last, we were making some progress.

A total idiot in three languages, written and spoken

The limitations of Google once again keenly felt. Did she just insult herself?

When she miraculously began speaking English, I thought I was getting through to her. Now I'm not so certain. Even so, I felt the experiment helped prove that while some customs and fashions may vary, miners are the same all over. The Code fits their lives like a glove, a one-size-fits-all glove. They just need to try it on!
Posted by MinerBumping at 02:42