Need to slake your thirst for tears? Then you've come to the right place. It's time for another edition of the Grab Bag. Here we go!

Since AFK miners can be gone for extended periods of time after they've been bumped out of range, I like to leave them EVEmails with instructions on following the Code and avoiding future bumps. Think of it as putting candies and gifts into their Christmas stockings. daniel Maken failed to appreciate it, and sent a reply to me and his 14 closest friends. Either he thought he could intimidate me by showing how many miner buddies he had, or he thought he pulled such a sick burn that he needed to share it with a wider audience. You be the judge. 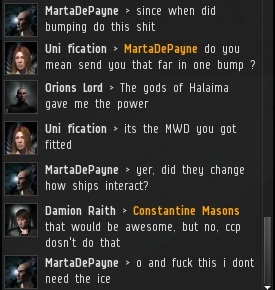 The super-fast Stabber Fleet Issue of Agent Orions Lord got quite a reaction from one miner, who was not accustomed to receiving such a powerful bump. 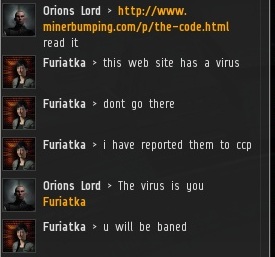 Meanwhile, Polish "madwoman" Furiatka warned all Halaima about the dangers of my website. If you're reading this, it means she was probably wrong about the virus.

Occasionally I am recognized by random passersby in my systems. I treat them with courtesy, just as I do with everyone else.

To'Kor had strong objections to the way he was presented in one of my field reports. I've been called many things, but I think this marks the first occasion I've ever been described as a "silver tongued devil". To'Kor, the reason people listen to me is not for my charm or my smooth talk--though I possess both. Rather, it's because I tell people the truth. Try it some time. You might like it.

Sadistis attempted to form a mass counter-bumping fleet. Too bad no one participated. It's difficult to mobilize an army when most of your troops are AFK.

More evidence of the positive change we're making. Soaza's whole corp has changed its attitude toward the importance of local. 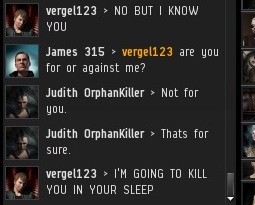 Like I said, I get recognized by random people. Statistically, not every encounter can be a positive one. 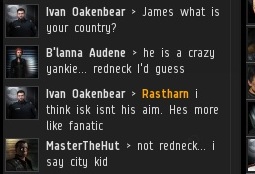 A redneck, a fanatic, and a city kid walk into a bar... Of course, the answer is that I am a bumper for all seasons. 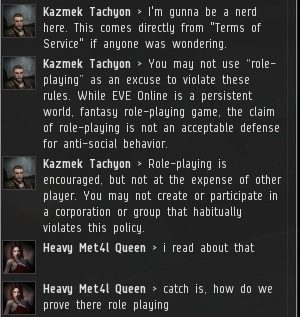 I like this. Something about the idea of the rebels trying to find proof of role-playing just makes me smile. 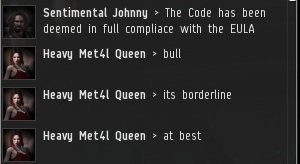 After all this time, I suppose "borderline" is good enough for CCP. 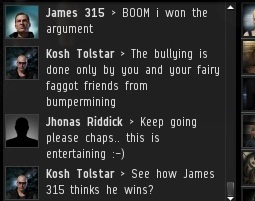