Previously, on MinerBumping... Highsec miner and former Red Pen member Ba'Ba displayed some troubling attitudes and beliefs about the New Order. The Supreme Protector investigated this phenomenon. At the conclusion of this series, an impassioned plea from Ba'Ba to the shareholders will be presented, and the shareholders will vote to decide her fate. 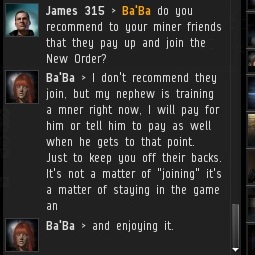 Ba'Ba was evasive about whether she supported the New Order, instead putting forward her theory of "payment and neutrality". I would need to take an indirect approach, I realized. At first, what I found was heartening. 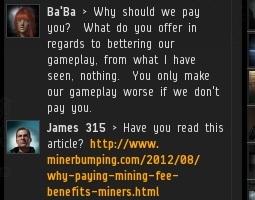 But then Ba'Ba began asking me questions. Her questions revealed more about herself than perhaps she intended. 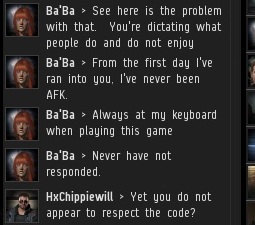 I had done Ba'Ba a favor by linking her to the classic "Why Paying the Mining Fee Benefits Miners" essay. But after she read it, she continued to find fault with the Code. 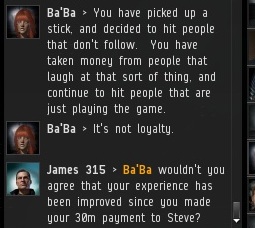 Ba'Ba revealed not a trace of gratitude for what the New Order had done for her. 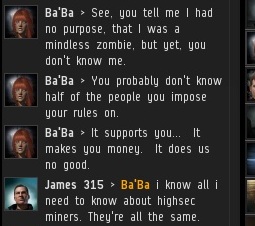 Then she made statements that implied the Supreme Protector is uninformed about the nature of the miners he governs. I would say the accuracy of Miner Bingo suggests otherwise! 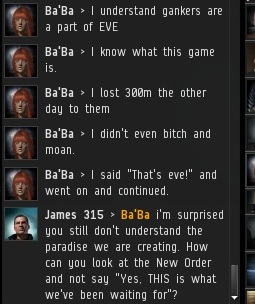 At no point did Ba'Ba confess that she needed the Code or the New Order. Quite the opposite; she repeatedly asserted her own righteousness. All this from the same miner who filed petitions against me? 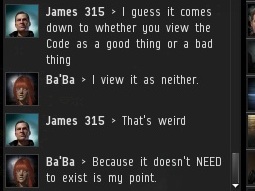 Again and again with the "neutrality" business. Where was the joy? Where was the enthusiasm and lust for life that normally marks those who follow the Code? 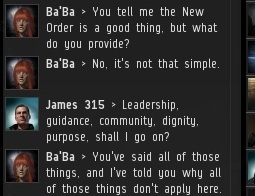 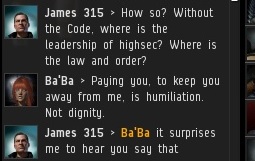 Talking to Ba'Ba became like trying to reason with a brick wall. Rather than accepting and agreeing with my explanations, she simply denied them. I was struck by the similarity between her attitude and that of the Code Deniers. For all you miners out there, the denalists are not the people you want to emulate. 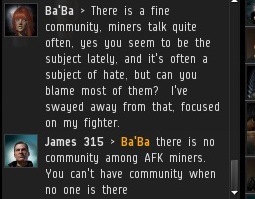 Ba'Ba disclosed--perhaps inadvertently--that she had been communing with rebels. That would be fine, if she had taken the opportunity to infiltrate and spy upon the rebels. But this was the first I was hearing of it. 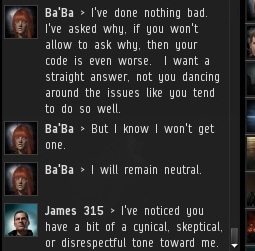 Ba'Ba fell into a pattern of negativity. She demanded to know what was good about the New Order, but when she was told, she simply denied it and repeated her demands. And her insubordination was palpable. 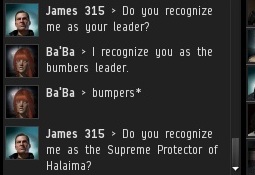 I didn't give up. I wanted to give Ba'Ba a way out of the hole she was digging for herself. One affirmation that she recognized me as her leader and the Supreme Protector of Halaima was all it would take to put her back on the straight and narrow. 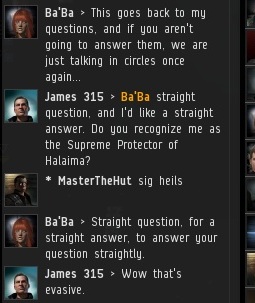 Ba'Ba slapped away one life-line after another. Needless to say, I was astonished.

To be continued...
Posted by MinerBumping at 02:05