After I delivered the Big Announcement about our vacation in Tolle for the Gallente Ice Interdiction, the fleet made its way to our temporary home. 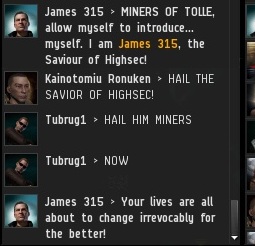 I was keenly aware that most of the miners in Tolle probably have never encountered miner bumpers before. I wanted to make a good first impression. 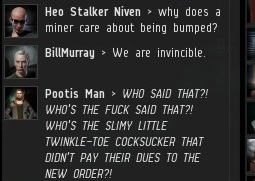 The Agents of the New Order seized command of Tolle with all the confidence of a people who knew they were on the move. 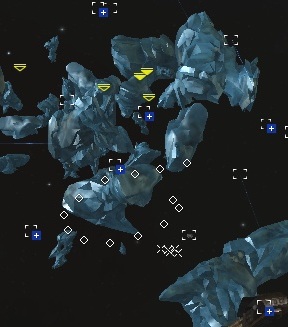 Miner after miner got punted out of mining range, and the ice field filled up with bumpers.

When I arrived in Tolle, I anchored a secure container 150km from the ice field to leave a message of hope. Agent BillMurray saw an opportunity to put his bumping finesse to the test. 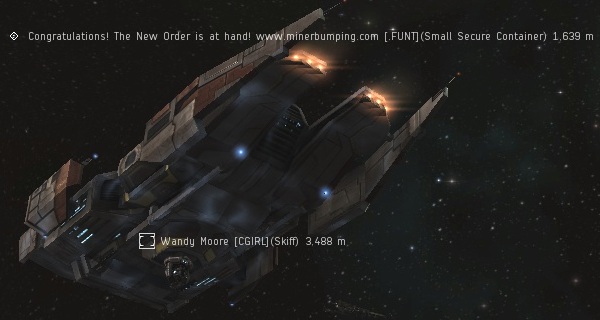 With surprising speed and accuracy, he slapped exhumers all the way to the container, where he took this picture. A potential "miner hockey" star in the making? 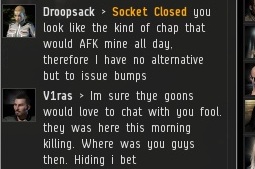 Our fleet took the miners of Tolle completely by surprised. Unfamiliar with our superior tactics, they had no way of organizing resistance. Miner V1ras had hopes of being rescued by the Goons. You know a highsec ice miner is in trouble when he thinks his best shot is being saved by Goons.

Even in the distant lands of Gallente highsec, we encountered a refugee from one of my earlier conquests. 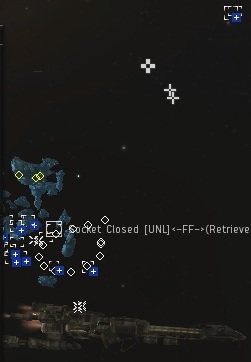 The bumper to miner ratio shot upward. Miners fled in terror. Agents had to compete with each other as they pursued those who remained. 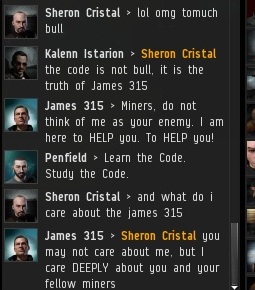 Unlike many other systems, Tolle did not have a resident "den mother" or patriarch around which rebellion could gather. Some miners were insistent in their opposition to the new regime, but they were out-debated by our Agents at every turn. 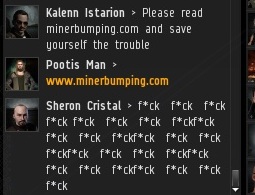 Logic went out the window for some miners. Like the bots they seek to become, they experienced system failure. 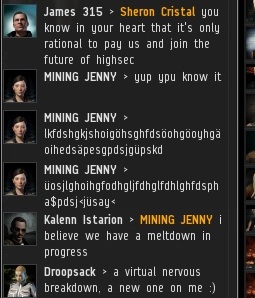 MINING JENNY's loss of reason may remind some long-time readers of earlier meltdowns.

Meet ice miner crab nicholson extreme. From his name, you might think he was something a bad '90s marketing campaign coughed up. But you would be wrong! In fact, he turned out to be the smartest miner we encountered that day. 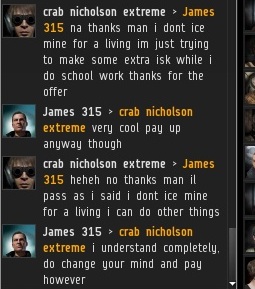 I extended crab an invitation to pay me money and join the New Order. He wasn't interested, but I made the hard sell.

crab became the first of the Tolle miners to purchase a mining permit. 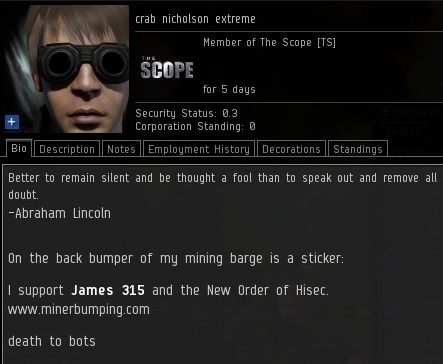 Since there were so many Agents around, I advised crab to put a loyalty oath in his bio, so everyone would know he was in compliance with the Code. I linked him Airon Taiyou's bio as an example. crab copied it. 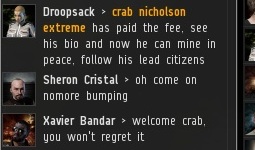 crab was quickly embraced by his new family. He earned the distinction of being the only miner able to mine in peace.

Others weren't as forward-thinking. Though Sheron Cristal didn't make good on his promise, someone else was recording. Agent Toby tonberry made a time-lapse video of part of our excursion and uploaded it to YouTube. (It's recommended that you use full-screen and a higher-quality setting.) Here's a link to his video:

The first few minutes show the fleet goofing around in Halaima while I gave the Big Announcement. At about 2:40 you can see the action in Tolle. It's funny to watch us sped up like this because you can see ships sliding across the ice field like shuffleboard pucks. (And the blue ice looks even weirder when you see it rotating.)

But would the rest of Tolle follow in crab's lead, or would they attempt to resist?

To be continued...
Posted by MinerBumping at 00:22