Are You Talkin' to Me?

As I've said before, when I go about my business in the ice fields, I often need to engage in multiple conversations simultaneously, much like a great chess player who can play multiple opponents at once. All while repeatedly bumping orbiting miners and handling multiple private convos with interested parties from around the galaxy. This heroic multitasking is just one of the reasons I was made the Supreme Protector! 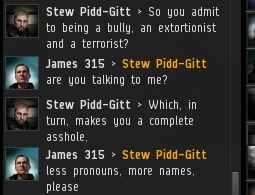 Local chat is usually almost dead in highsec, outside of the major market systems like Jita. Even systems with a hundred or more people in local can be dead silent. But when I enter a system, local springs to life. You get the occasional Evealopalous spammer passing through, but probably 95% or more of the conversation is about me and what I do. The New Order is the center of the universe--or solar system, at least. 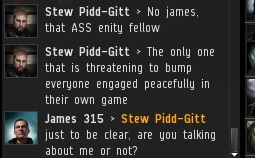 Stew Pidd-Gitt began complaining about something in Halaima when I was bumping miners. I didn't see him in the ice field, but he was saying a lot of the same things I hear from the miners I bump. I asked for clarification. 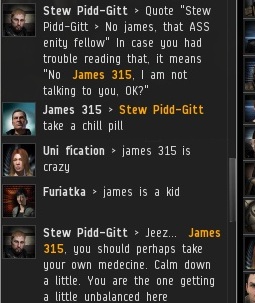 Stew claimed he was not talking to me. And it sounded like he meant it. 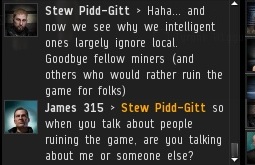 When Stew left, the way he spoke still raised my suspicions. I decided to have a spy get some intel on this Stew fellow to find out what made him tick.

The next time Stew was spotted in Halaima, it sure sounded like he was talking about me.

I don't have the statistics on hand, but I believe the New Order and its supporters now constitute the majority in highsec.

If it wasn't clear before, the evidence made it crystal. Stew was just another unruly miner whining about the New Order and the way we govern Halaima.

As usual, Stew's imperfections were merely the full flowering of his disrespect for the Code! 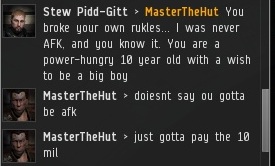 So much for the wisecrack about the Code and its electrons. When Agent MasterTheHut disciplined Stew, Stew suddenly placed a high premium on the proper application of the Code. Stew made the classic mistake of assuming AFK mining is the only way to violate the Code. But even if that were true, Stew's hypocritical 180 on the Code's value was breathtaking.

Stew continued his descent into Miner Bingo clichés. Maybe he had been talking to me, and maybe he hadn't. Regardless, the investigation showed Stew to be an enemy of the New Order.
Posted by MinerBumping at 01:43

Email ThisBlogThis!Share to TwitterShare to FacebookShare to Pinterest
Labels: Intel, Tears, The Code