Flipping Cans for the New Order

We've previously covered some of the many non-bumping ways Agents can serve the New Order. Today I would like to provide a field report of an Agent who used can-flipping. An EVE classic, the aggression mechanics behind can-flipping have been altered numerous times. In the upcoming "Crimewatch" expansion, CCP plans to nerf it into the ground, the same way they nerfed the suicide ganking of miners. Until then, let's celebrate the art!

Highsec miner Samdalrey Miller was griping about me in Kamio a few days ago. He spent some time complaining about the game mechanics by which I win huge kill-to-death ratios in wars declared against me--even though those mechanics were put in place to make carebears like Samdalrey happy!

Uh-oh. Samdalrey suddenly voiced his displeasure with Agent Orions Lord, a specialist in highsec aggression mechanics. That could only mean one thing.

Without warning, he had lost a mackinaw and fittings worth nearly a quarter-billion isk. 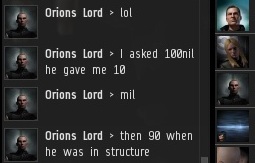 On top of that, Orions Lord successfully negotiated a ransom from Samdalrey during the attack. Samdalrey tried to get away with only a 10 million isk ransom, but eventually forked over the full 100 million. His ship was destroyed anyway, bringing the total damage to nearly 350 million. But how did this happen? 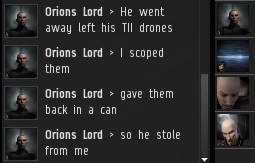 If you take from someone else's container, you are "flagged" with aggression, allowing that person to shoot you without Concord interference. Orions Lord helpfully returned Samdalrey's drones to him in a container. Since Orions Lord was flying an unassuming mining barge, the threat was not perceived. 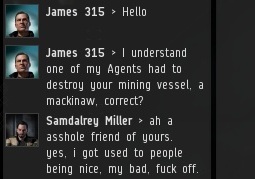 Samdalrey declined to offer a detailed comment in a private convo.

All of this could have been avoided if Samldarey had simply complied with the Code instead of showing me disrespect. He says he'll never pay the 10 million isk to join the New Order, even though he already paid Orions Lord 100 million in false ransom. Wouldn't it have been cheaper for him to pay me 10 million to begin with, and forego the ship loss and ransom payment? 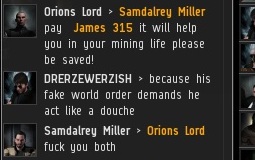 Agents like Orions Lord provide an enormously beneficial service to miners. By destroying their ships, Agents help set the consequences of payment and non-payment into a sharper relief, thereby aiding miners in the decision-making process. But at the end of the day, the miner needs to make the decision. We can only knock at the door and wait for them to open it.

The mackinaw was named "Happy bday Sam", apparently a gift from one of Samdalrey's friends. Now it is a wreck. Such gifts are far less valuable than the gift provided by the New Order that day. Once accepted, the wisdom of the New Order cannot be turned into a wreck; it stays with you until the end of EVE.
Posted by MinerBumping at 17:23