Miners Turn to the New Order

We are living in extraordinary times. In recent days, posters on the official EVE forums have essentially conceded our Invincibility, and one of the most notorious rebel leaders has switched sides to join the New Order. Now we are seeing the signs of an awakening among the miner population of highsec. 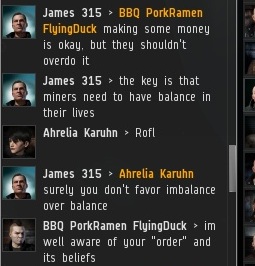 In Tolle, I was followed by BBQ PorkRamen FlyingDuck, who was attempting to counter-bump me (at least, I think he was) in a MWD'ing Ibis. 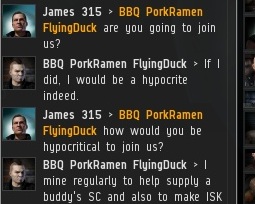 He felt he couldn't join the New Order because he frequently partakes in mining. 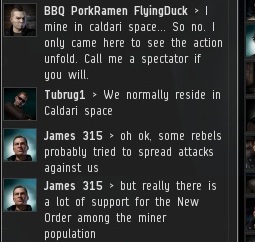 As I explained, some of my best friends are miners.

After spending some time with us in the Tolle ice field, BBQ came to realize we were not the monsters that our enemies described.

In fact, BBQ had an interest in becoming a bumper himself. 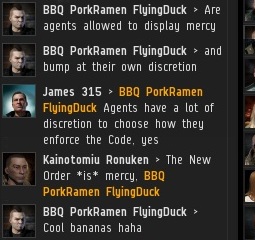 For many, the glamorous life of an Agent is difficult to turn down!

Meanwhile, Agent Tubrug1 informed me of anti-Order activity in the Aydoteaux system, which is next door to Tolle and a hotspot for ice miners. 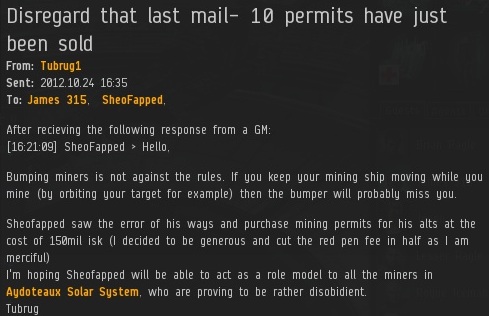 Just as I read Turbrug1's first EVEmail, I received his news of victory. The multi-boxing miner got a quick GM response to his petition and promptly signed up his fleet by paying Tubrug1 150 million isk. According to the petitioner, the GM response was as follows:

Bumping miners is not against the rules. If you keep your mining ship moving while you mine (by orbiting your target for example) then the bumper will probably miss you.

Judging by the quick response time, GMs are fielding a lot of these anti-Order petitions and educating the petitioners in an efficient manner. Kudos!

I received an EVEmail testimony from a miner named DeadSea Youngblood. More articulate than most, DeadSea's letter contains the same core message that I get from miners across highsec.

At first, DeadSea played the game like many highsec miners. But he knew there was something wrong. Something missing.

Having been enlightened by MinerBumping and my other writings, DeadSea came to see the world around him as it truly is, stripped of the pretenses of greed and bot-aspiration.

DeadSea was liberated by the Code and transformed into a true EVE player. He also purchased 722 million worth of shares by spending all the isk he had on hand. It's the feel-good story of the week!

So if you're a rebel out there trying to plot some way to bring down the New Order, you need not bother. Miners are perfectly happy with the change we are bringing to highsec. And while the journey of self-discovery we recommend for the miners is not optional, it's practically voluntary, because in the end they'll be enlightened and retroactively agree to it on behalf of their earlier selves. Be practical, join the New Order.
Posted by MinerBumping at 18:10