Our Agents have been very busy in Gallente highsec during our little vacation there.

The Aydoteaux system, right next door to our HQ in Tolle, is a popular ice-mining spot. It's also fertile territory for Agents looking to sell mining permits.

I stumbled into an ice field full of Code-compliant miners. Agent Tubrug1 showed me around. 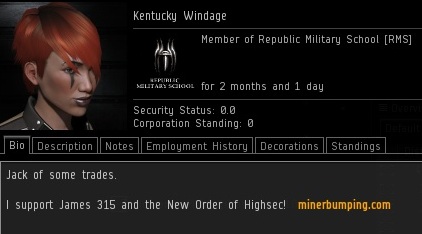 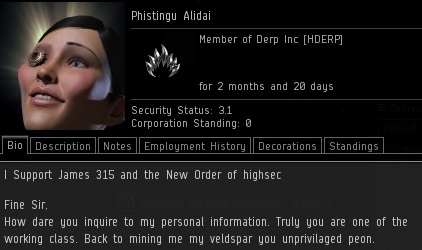 Talk about gentrification! The neighborhood has much improved since the New Order moved in. 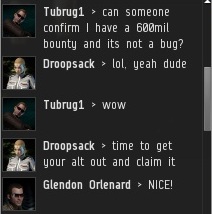 It seems our Agents' efforts have not gone unnoticed. The next day, Tubrug1 found a surprise when he logged in. 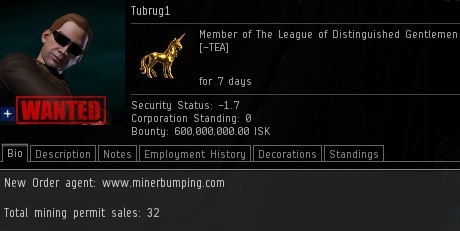 Some unknown person(s) placed a 600 million isk bounty on his head. Because bounties can be collected by anyone--including the target's own alt--this was essentially a free gift of 600 million isk from some misguided enemy of the New Order.

EVE players can look up the biggest bounties in the game. Because there's no incentive to give your enemy a large bounty unless you're totally ignorant of game mechanics, all of the top bounties are "fake" bounties that people placed on themselves to get on the "top bounties" list. Whoever put the 600 million on Tubrug1 may have given him the largest genuine bounty in EVE.

To add an extra pinch of absurdity to the situation, all uncollected bounties will be wiped out in early December, when the next EVE expansion is released. The new bounty system will also be broken, but in a different way.

As for my own bounty, it remains locked in at 106 million due to my positive security status. The bounty was placed on me over a year ago by miners angry with my suicide ganking--I had yet to bump a single miner.

Will anyone step forward to take responsibility for the giant bounty/gift placed on Tubrug1's head? Will disgruntled miners waste their isk on broken bounties after the new expansion? Time will tell!
Posted by MinerBumping at 17:56