Over the past week, the highsec community has been transfixed by the trial of Ba'Ba, a miner who previously paid her way off the Red Pen list but then jeopardized her mining privileges during an altercation with the Supreme Protector of Halaima. No miner who has paid the mining fee has ever lost his or her privileges before.

When all was said and done, Ba'Ba stood accused of the following violations of the Code:

The Supreme Protector washed his hands of the matter and sent it to a vote of the Shareholders of the New Order. The shareholders met in this thread on EVE-O. Two shareholders, JIATPuOT and xploryk Hashur, voted by EVEmail. (EVEmail is always a voting option, since some of our illustrious shareholders are currently banned from posting on EVE-O.)

The voting process itself was tense and dramatic. The vote went back and forth, first favoring Ba'Ba then turning against her and back multiple times. Voters were split almost dead-even. Shareholder Drago Wolfbane Skorvalk voted in Ba'Ba's favor (against the motion) but then changed his mind, cursing himself for voting the wrong way--and realizing the vote he regretted casting could be decisive.

In another emotional moment, BillMurray offered an impassioned plea to Ba'Ba, drawing from his own experiences with the Screen Actors Guild. Bill was willing to vote in Ba'Ba's favor if she simply declared her recognition of the Supreme Protector's authority. Phoenix Bibbs echoed the call. With Bill's sizable holdings, the outcome of the vote was potentially at stake.

Many voters offered thoughtful explanations for why the voted the way they did. Those in favor of the motion stressed the importance of upholding law and order, and supporting the traditional values of the Code and those who enforce them. Many were put off by Ba'Ba's demeanor. They cited "neutrality" toward the New Order as an unacceptable proposition.

Those opposing the motion focused on Ba'Ba's acts of submission--namely, her payment of 30 million isk for a mining fee, and her willingness to encourage her nephew to get Code-compliant. They suggested Ba'Ba's condition would gradually improve over time. They also gave her credit for the effort she put into the EVEmail she wrote stating her case.

When the whistle blew and the votes were tallied, twelve shareholders voted in favor of the motion to strip Ba'Ba of her mining privileges and return her to the Red Pen list. Thirteen shareholders (including Drago) voted against the motion. That's as close as it gets. But what about the number of shares?

Turnout was important. Just shy of 17,500 shares were authorized to vote (shares purchased after the commencement of the vote were not able to participate), but just over 5,000 shares voted.

Big investors played a key role. The largest investor, Gumby Inquisition Technologies corporation, declined to participate. The next two largest, Theangryhobo and Nanatoa, voted on opposite sides. BillMurray and Mallak Azaria, with 500 or more shares each, both voted in favor of the motion.

It was close, but the motion carried. 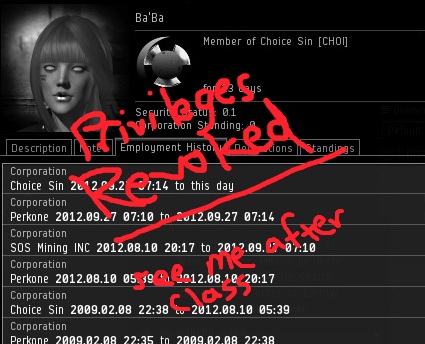 Ba'Ba is now considered fair game for bumpers. She has been added to the Red Pen list and must pay 30 million isk to an Agent of the New Order to be restored. In addition, according to the terms of the vote, she must also offer a pledge of allegiance to the Supreme Protector, James 315, and to the New Order of Highsec.

It is so ordered.
Posted by MinerBumping at 01:44

Email ThisBlogThis!Share to TwitterShare to FacebookShare to Pinterest
Labels: Business, Philosophy, The Code