Today is the first in a series of posts that constitute The Trial of Ba'Ba. You may recall Ba'Ba from her disastrous involvement in a conspiracy of Kino miners to petition for me to be permabanned from EVE. Or you might remember her from some of the colorful remarks she's made about me along the way.

Yet the story had a happy ending when Agent Steve the Pirate managed to convince Ba'Ba to pay the 30 million isk required to get off the Red Pen list and into the New Order. She became a poster child for the redemptive power of the New Order, and our extraordinary capacity for forgiveness.

Everyone lived happily ever after... or so we thought. Today Ba'Ba stands accused of serious violations of the Code, and is in danger of becoming the first paying miner to forfeit her mining fee. At the conclusion of this series, Ba'Ba's fate will be left in the hands of the Shareholders of the New Order. Ba'Ba has sent me an EVEmail stating (at considerable length) her side of the story. Prior to the shareholder vote, the contents of that EVEmail will be made available in its entirety. 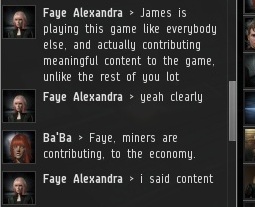 It all began in Halaima, as Faye Alexandra was busy teaching the local miners. Ba'Ba interjected an odd--though relatively innocent--comment.

Then she struck a peculiar tone with me. 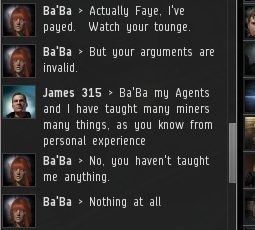 Given her experience with Steve the Pirate and the mercy of the New Order, I was surprised by her opinions and tone. 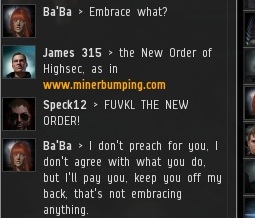 Ba'Ba denied that she embraced the New Order, which is a very strange thing for a Code-compliant miner to say. Had she suffered a relapse?

I asked the question point-blank, so she could clarify her status. But she did not respond. 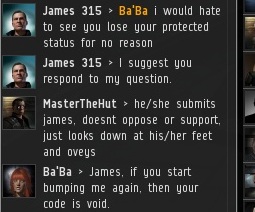 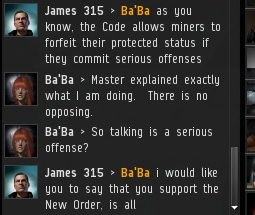 Obviously a miner who pays the mining fee but then rejoins the rebellion would forfeit her mining permit. So far, it's never happened, because it would be lunacy for a miner to abandon the New Order.

I offered Ba'Ba another life-line, inviting her to affirm her support for the New Order. But she became grouchy instead. What was going on? 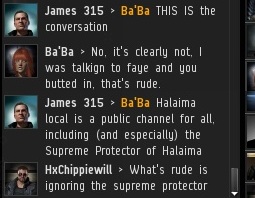 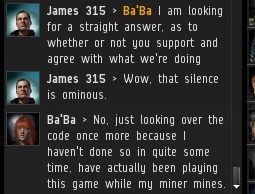 I gave her yet another chance to put the matter to rest, but was met with an icy silence. 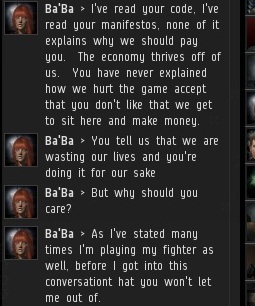 After she spent some time reacquainting herself with the Code, which is usually helpful for miners to do, she returned to local chat. But instead of expressing enthusiasm for the Code, she began a skepticism-filled rant. Had Ba'Ba lost faith in the Code? Would she throw away the only community in EVE that ever accepted her--and become the first apostate miner? Or was it all a big misunderstanding?

To be continued...
Posted by MinerBumping at 00:46