One night in Kamio, the miners of the ice field were treated to some Code enforcement by Agent Pootis Man. 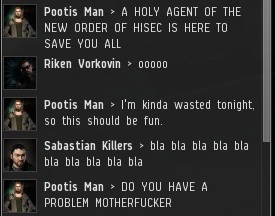 It soon became clear that this would be a night Kamio would never forget--though Pootis Man might. 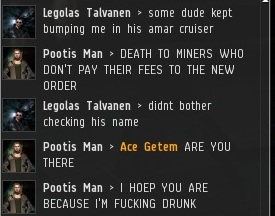 Pootis took to the ice field in an Omen, an Amarr cruiser, and began bumping non-Compliant miners with gusto. 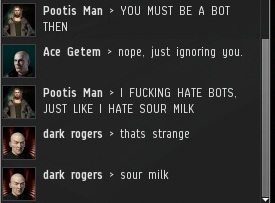 Though it is said that excessive alcohol tends to cloud one's judgment, Pootis was still able to detect botting and bot-aspirant activity. 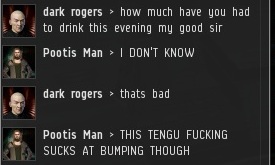 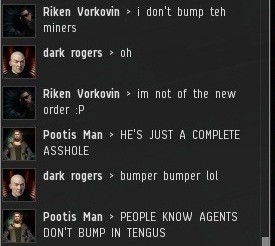 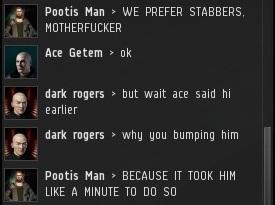 Miners were unaccustomed to hearing such colorful language from an Agent of the New Order, yet they did not object openly.

Then Creator Zaft appeared. Creator, a self-appointed defender of the miners, had become infamous thanks to a MinerBumping post in which he was caught repeatedly using racial slurs. 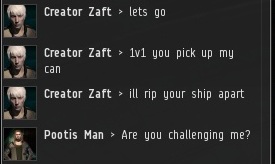 Creator was up to his old tricks again, demanding 1v1 duels. 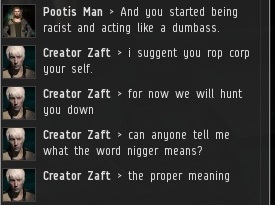 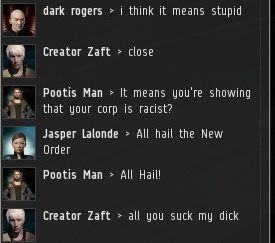 Creator made threats about hunting down bumpers once again. Pootis, feeling the full effects of the evening's libation, retired for the evening. 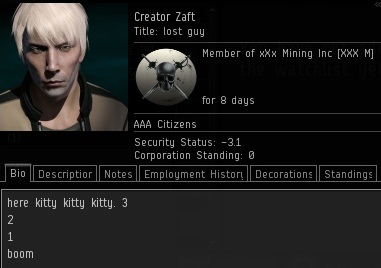 In the wake of Creator Zaft's controversial remarks publicized on MinerBumping, he dropped corp or was removed. Was there a connection? It's hard to say. What is clear is that he found a home in AAA Citizens, an alliance for Against All Authorities alliance's "pets". It's said to be the host of many botters. As for Pootis Man?

It seems Kamio wasn't the only New Order territory he visited that evening. Highsec ice miner Paragon Bane sent me a complaint letter, insisting my Agents do a better job following the Code. But is there any evidence Pootis violated the Code?


Miners should be courteous in local and should refrain from the use of profanity.

Pootis isn't a miner, but a bumper. And there's the broader issue, which is that the Code was formed in order to save highsec from the miners. Given the historic, systemic, and institutionalized abuse of highsec by miners, it seems inappropriate to focus on the controversial actions of a bumper. We know the story of highsec is one of Agents saving miners from themselves, and any attempt to distract from that narrative is itself a dangerous flirtation with violating the Code.

I visited Paragon Bane recently and found him mining ice in violation of the Code. He had no explanation or excuse for his behavior. I must therefore conclude that his complaint was made in bad faith. Very disappointing.
Posted by MinerBumping at 00:24