Zak Fey, the CEO and chief diplomat of the Midget Stripper's Union, has been an Agent of the New Order for quite some time now. As with all Agents, his decision to stand for what's right requires immense personal courage. That's the secret of the New Order's success: Ordinary people doing extraordinary things, every day. Recently Zak shared with me some of the EVEmail he's received from disgruntled miners.

The irony is, he only gets this kind of mail because he's doing the miners an extra service, over and above what Agents already do. 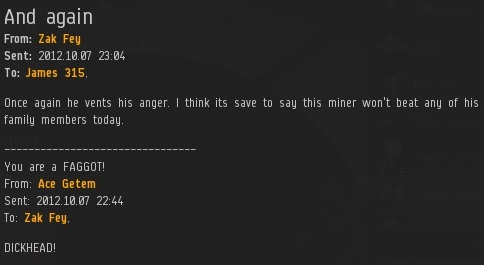 You see, when a bumper learns that a miner is AFK, he can't count on the miner returning to keyboard in time to see the warning/explanation in local chat, since other chatter will cause it to scroll up. So Agents like Zak (and myself) will bump the miner out of range and then send the miner an EVEmail telling them what happened. And this is the thanks we get for our courtesy.

Sometimes the EVEmails come from non-English speakers. Using Google Translate, we've taken an in-depth look at what Russian and Polish miners have had to say. The EVEmail message pictured above is in Italian.


Get to work, idiot.

Not much lost in the translation, there. It's a standard variation of the Miner Bingo square, "Try working for your isk honestly." 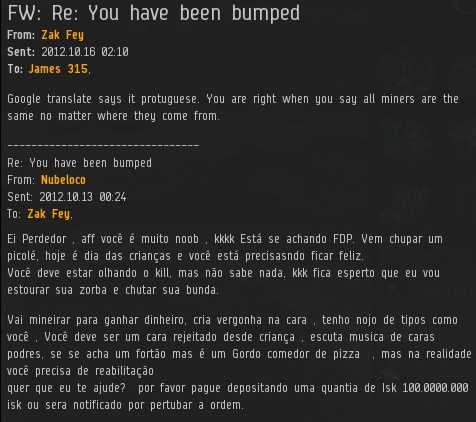 Nubeloco went on a rant in Portugese. EVE is a truly international game. Can we color in the entire world map?


Hey Loser, you are very noob, kkkk. You are thinking FDP. Come suck on a popsicle, today is children's day and you should be happy. You should be looking at the kill, but know nothing, kkk gets smart. I'm gonna blow your zorba and kick your ass.

I mine to make money, create shame in the face, got sick of guys like you, you must be a guy rejected as a child, listening to music bad guys, if you think a strong one but Gordo is a pizza eater, but in reality you need rehabilitation.

Want me to help you? Please pay by depositing the amount of 10 million isk, or you will be reported for disturbing the order.

Seems to me that Nubeloco is the only one disturbing the Order! 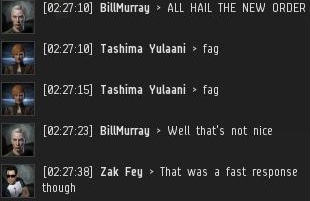 Zak sent me the screencap above. Since he has time-stamping enabled in his local window, you can see that Tashima Yulaani responded to Agent BillMurray's call to obedience in record time--in less than a second. Either that, or Tashima was saying that to someone else when our Agents arrived, and decided it was just as applicable to what Bill said. Who knows?
Posted by MinerBumping at 17:09