Time to revisit the Grab Bag once again and pore through random miner tears. Let's go!

Today's edition of the Grab Bag will have a bit of an "Agent" theme, as the proliferation of New Order Agents has impressed the miners of highsec. When Senbar Fley reassures his fellow rebels that we'll be banned soon, does that mean we'll be banned Soon™? As in never? 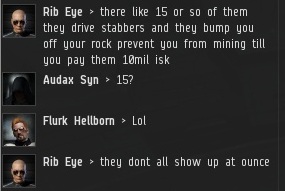 I found this interesting because it's the first time we see a miner offer an estimate of how many bumpers there are. Even I don't know, because they don't all send me EVEmails or operate in New Order territory. Rib Eye claims to have personally seen around 15 different bumpers (in Kino, I think). Is he right? Who knows? 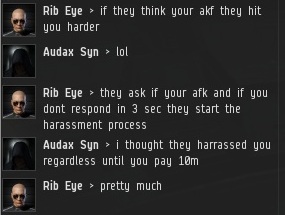 One thing's for certain: Whether you are silent or loud, the only way to avoid being bumped is to pay your 10 million isk. 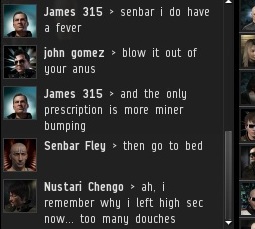 Up next is a refreshing change of pace:

Rather than comparing me to Hitler, I am compared to the Spanish Inquisition. Kudos for the originality.

...Who didn't see that coming?

When DamDuiker invited me to SA, I wasn't sure what he was talking about. SomethingAwful?

I'm not sure threats of real-life violence count as credible if I have to go to Africa. The EVE Fanfest threats sound realistic by comparison.

A comment on my The New Order Takes Uotila post. I'm still trying to "guess" what happens if we drive away CCP's bump-phobic customers.

Shalo Cadri is not the first miner to suggest that bumpers are trying to "play god" with their lives. An admission of the awesome power we possess! 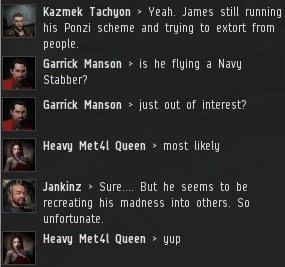 Bumpers don't die, we multiply. If I "recreate my madness into others", does that mean MinerBumping has gone viral? 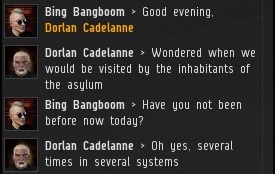 Another clue from a miner about our spreading influence. 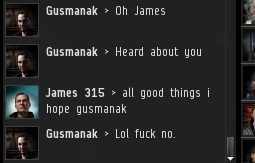 Miners, don't think you're doing anyone any favors by poisoning your friends against me. You'll only make it more difficult for them to learn how to behave properly. If you want to help, why not gift them a mining fee? Please send me 10 million isk and include "mining pass for (name)" in the reason slot. Makes a great belated Yom Kippur gift!
Posted by MinerBumping at 22:51