You Can't Block the Signal

In my quest to educate, improve, and enrich the lives of miners, I have taught them quite a bit about game mechanics. Specifically, I've tried to bust some myths about ways bumpers can supposedly be defeated. Some of these, such as counter-bumping and the "carebear stare", continue to be popular in spite of my efforts. Another tool, used less frequently, is the "block" feature. 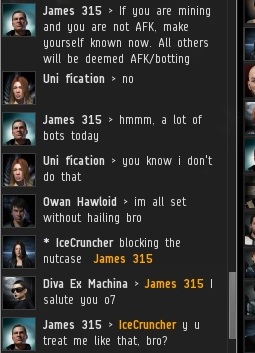 Blocking another player makes their chat in local invisible to you, and it prevents them from sending you EVEmails, etc. When you block a member of the New Order who's trying to help you, you're no better than a book-burner. A burner of valuable books.

Highsec miner IceCruncher had barely gotten to know me when she decided to abuse the block feature. Who is IceCruncher, and why did she respond this way? She has no bio. Like many highsec miners, she belongs to a generic corp but mines on her own. Add it all up, and it appears IceCruncher is seeking oblivion. The New Order to the rescue! 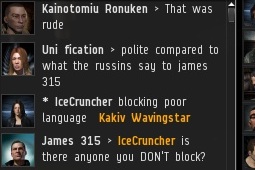 After some random person directed profanity at me, Icecruncher blocked him as well.

Blocking people seemed to comprise IceCruncher's entire identity. Just when Agent Picard Azukond was making a really great point about how the real harassers in highsec are those who don't do what I say, IceCruncher blocked him. So much for the exchange of ideas. I thought IceCruncher's corp was all about "divercity"? 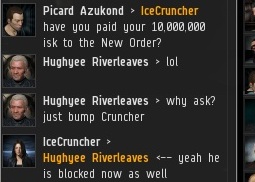 So maybe IceCruncher just hates the New Order and anyone who uses profanity in local. But Hughyee Riverleaves, a fellow ice miner, ended up in the crosshairs, too.

At this point I would suggest that IceCruncher's choice of Halaima as her mining HQ may not have been optimal. 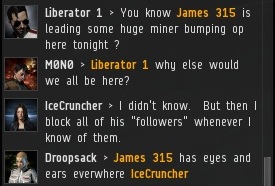 Then came the day of our great bumper fleet. IceCruncher was overwhelmed. Everywhere she looked was an Agent... or a potential Agent. The problem with blocking bumpers is, they can still bump you. And no matter how many bumpers you block, there will always be more. 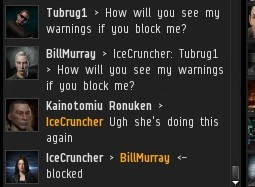 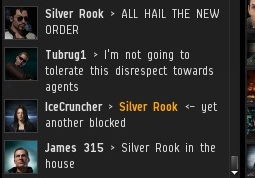 Why do people who block others always feel the need to announce their blocks to the world?

IceCruncher was consumed by her suspicions. Even a nice, innocent conversation could be the prelude to one of her blocks. 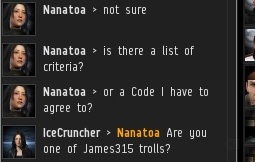 The suspense was like something straight out of a Tarantino movie.

I didn't see that coming! 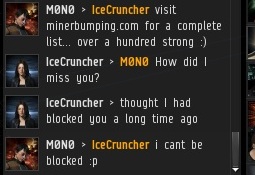 In the end, there is no blocking the New Order. Blocking bumpers is like trying to block the future. We represent progress. I look forward to the day IceCruncher joins us. But she's going to have a lot of unblocking to do.
Posted by MinerBumping at 01:27