Our successful operations in Gallente space have sent a shudder of horror throughout the carebear population of highsec. It seems when the New Order concentrated its activity within well-defined borders, the miners outside of our territory shrugged their shoulders and ignored us. Our incursion into the Tolle area has raised the possibility of the New Order striking anywhere, at any time.

In less than a day, two separate threads on EVE-O were created for the purpose of begging CCP to nerf the New Order's ability to bump Code violators. Pictured above, the OP for a thread entitled, "CCP allow miners to defend against bumpers?" This thread has grown to 17 pages and counting, with hundreds of replies.

Note that the OP completely surrenders to the idea that there is no counter to our bumping, and that miners "MUST" submit to us. Progress!

A second thread, "space anchor", began with the OP's complaint about his Orca being bumped, and quickly devolved into a discussion about nerfing the New Order by creating a "space anchor" module to counter bumps.

Two different ISD members chimed in on the "space anchor" thread, urging players to brainstorm ways of countering the New Order. This is particularly remarkable, because bumping has been in EVE for more than 9 years, and people are only now seeking a "counter" to it--the sincerest possible recognition of our power.

It may seem silly to the average reader that CCP would contemplate creating an anti-New Order module, or that miners across highsec would sacrifice yield/tank to fit it. Of course it's silly. But that's how desperate Code violators have become.

Disgruntled miner and presumed bump "victim" Tali Ambraelle took the lead in using the threads to repeatedly excoriate the New Order and the humble Supreme Protector. Pictured above is a typical post (with the body of the text moved up to fit on the screencap). Tali advocates banning me from the game. Judging by her other posts, she's trying to make "belligerent undesirables" become a new catchphrase.

Some of Tali's other replies shed light on the carebear perspective of the New Order threat.


Ah. Sorry. The thing is though, while you're right yes, they've moved and expanded their efforts. That is the concern. If it was in one system...they're still assholes, but fine. When it expands and multiple systems are being affected...no.

This reinforces my suspicion that our temporary move to Gallente space has escalated the miners' fears. And here's the text of another of her replies, where she lays out her general theory of what miners are entitled to when they pay their subscriptions:


....Therefore, they interrupt, without consequence, the gameplay of those who choose to sit in a quiet corner to themselves, talk on corp chat, make a meal, or do whatever and mine their little hearts out. They do not pay to be griefed; they pay to play. I don't care if "this is Eve" or "working as intended" or "get over it." If I could kill you in the game to stop you, this wouldn't be an issue, but the current aggression tactics are not conducive to an effective counter attack.

And don't bother with the "why should they interrupt my gameplay?" Your right to game play ends where it infringes on others' rights.

Tali's not alone in her open defiance of my authority over highsec.

Rebel NEONOVUS recommends placing me (and only me, apparently) into a "holy corp" from which I can never leave, so that others can wardec me. Fascinating, but pure madness.

Though our enemies like to spam the threads with lots of replies, our supporters are still the majority.

Noted forum warrior Malcanis, like many others, points out the absurdity of flagging bumpers for aggression. Just think of the Jita 4-4 undock.

In the end, whines to CCP on EVE-O won't work. But they will raise awareness of and support for the New Order. More whines, more bumpers... 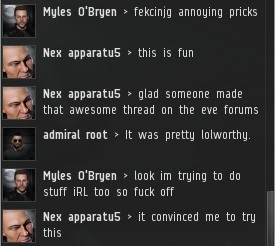 That's the real reason the miners can't stop us: You can't fight an idea. Not with bad ideas, anyway.
Posted by MinerBumping at 18:17